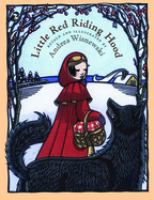 A version of the classic story about a little girl, her grandmother, and a not-so-clever wolf, set in nineteenth-century rural New England.

Inspired by the early-nineteenth-century buildings and interpreters' costumes at Old Sturbridge Village, Wisnewski places the story of Little Red Riding Hood in an old-fashioned New England setting. Wisnewski, whose first book was A Cottage Garden Alphabet (2002), here illustrates the familiar tale of Little Red Riding Hood in a series of handsome double-page pictures that have the look of tinted woodcuts, Wisnewski's signature style. Actually, the black lines are intricately cut black paper, overlaid on white backgrounds painted with watercolors in pleasing hues. From the tiny paw prints indented on the cover to the heavy, broad-bordered pages to the appealing endpapers, the book is thoughtfully designed and beautifully made. Parents looking for a version of the tale for young children may find the text a bit too long, but plenty of adults and children will admire the effective compositions, the restrained use of color, and the distinctive look of Wisnewski's artwork. ((Reviewed January 1 & 15, 2007)) Copyright 2007 Booklist Reviews.

Wisnewski (A Cottage Garden Alphabet) retells the familiar story, adorning it with graceful illustrations that emulate woodcuts, washed with saturated watercolors, and brimming with details. In her retelling, she recasts the nearby woodsman as Little Red Riding Hood's father and, arriving at Grandmother's, the heroine recognizes the wolf straightaway and uses the familiar questions regarding the odd physiognomy to buy time. Other details strike familiar tones: Grandmother is swallowed whole ("It had been a slim winter"), and the girl's father, after "carefully slitting open the wolf's stomach," stares gravely into the belly of the flayed but bloodless creature. (Flowered bed curtains spare his daughterâ€"and readersâ€"any implied gore.) Unfortunately, the narrative suffers from several overlong sentences (e.g., " 'Thank you, wolf,' she said and started down the path not noticing that as soon as she turned her back the wolf slid back into the trees and took yet one more of his shortest short cuts through the woods"). Children will enjoy studying the detailed artwork, from Grandmother's pets (a tabby hides under the bed while a ginger cat flees) to cozy interiors modeled on Old Sturbridge Village in Massachusetts (according to an author's note). The bookmaking's lovely, too: lupine footprints trot across the front cover (beneath the book jacket), and red gingham endpapers conjure both the cloth protecting Little Red's basket and Grandmother's cheery tablecloth. Ages 7-up. (Jan.) [Page 51]. Copyright 2006 Reed Business Information.

PreS-Gr 3— A handsomely illustrated version of a folktale favorite. Wisnewski's retelling is straightforward and the language has a comfortable, folksy cadence. The tale ends happily, as Little Red Riding Hood's father comes to the rescue, vanquishes the wolf, and extracts Grandmother from its stomach, "shocked and shaken, but none the worse for wear." The illustrations—black-and-white prints made from cut-paper designs and then painted in watercolors—have the depth and texture of woodcuts. An author's note sets the tale in Old Sturbridge Village, a living history museum in Massachusetts, and the artwork reflects details of life in early-19th-century rural New England. While the characters' faces tend to be a bit wooden, their clothing and other fabrics, the exteriors and interiors of the houses, and the snow-covered woods are all vividly and gracefully rendered. The endpapers' red-and-white checkered pattern is repeated on the napkin covering the basket of goodies and the tablecloth in Grandmother's kitchen, and bright red winterberries provide a colorful balance to the child's "bright as a berry" cloak. Visual details abound, and observant youngsters will notice that a calico cat plays a heroic role in the story. An eye-catching addition to folk and fairytale shelves.—Joy Fleishhacker, School Library Journal [Page 137]. Copyright 2007 Reed Business Information.

A version of the classic story about a little girl, her grandmother, and a not-so-clever wolf, set in nineteenth-century rural New England.

The story of Little Red Riding Hood reset in rural New England of the early nineteenth century.Into the forbidding but beautiful New England winter steps a resourceful farm girl in her scarlet cloak, bound with her basket of presents for her ailing grandmother. Told in a folksy cadence, the tale ends happily, as Little Red’s father comes to the rescue (sharp-eyed children will notice a calico cat helped, too!).Loving detail fills each illustration in this unique version. Andrea Wisnewski based her interiors, architecture, and costumes on models found at Old Sturbridge Village, the living-history museum in western Massachusetts. The images, full of period detail, are done in a medium Wisnewski has made her own: black-and-white prints made from intricate papercut designs (the results look much like woodcuts) that are then hand painted in gloriously vivid watercolor.This is a beautiful, totally original, reimagining of the German fairytale classic and, yes, Little Red does survive the ravenous wolf—moist but intact. A wonderful version of the classic tale, perfect as a read-aloud, a picture book to share.