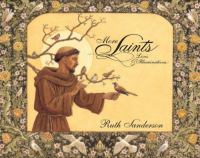 This sequel to Saints (2003)follows the same pattern, offering one-page profiles of 36 saints, each illustrated with a portrait. The first book covered saints of the first millennium; this one surveys the second. Consequently, there will be more familiar names here, including St. Francis, Joan of Arc, Padre Pio, and the Blessed Teresa of Calcutta, who is on the fast track to sainthood. As in the previous volume, this one harks back to old-fashioned saint books, and Sanderson shows no aversion to relating experiences that may seem odd to modern readers. For instance, Rita of Cascia knew that her volatile sons would seek revenge for their father's murder, so she prayed they would not have blood on their hands. Unexpectedly, they both died. Even though some of the stories are violent, the artwork is soft and gentle, the portraits often bordered with floral designs. Along with each story are the dates of the saint's birth and death and notation of feast day and patronage. A glossary, a short bibliography, and three Web sites are appended. ((Reviewed February 1, 2007)) Copyright 2007 Booklist Reviews.

Because much of what we know today about saints is culled from legend, and the process of canonization remains a bit mysterious, these holy figures intrigue as much as they inspire. Sanderson (The Snow Princess ) strikes a truly compelling tone in this fine collection of brief biographies, a sequel to her Saints: Lives and Illuminations , which featured saints from the first millennium. Here she profiles 34 saints and two blessed (who have been beatified, not yet canonized); each saint receives a full page of coverage that includes an elegantly bordered oil-and-pencil portrait, which occupies about half the space. Saint Francis of Assisi, Saint Elizabeth Anne Seton and Blessed Teresa of Calcutta are among those who grace this volume, which serves as both an interesting read and a spiritual reference. Birth and death dates, feast day and patronage of each saint are included in the individual entries. In addition, an index and glossary of terms at book's end make it particularly user-friendly. All ages. (Jan.) [Page 66]. Copyright 2006 Reed Business Information.

In the follow-up to Saints: Lives and Illuminations, detailed portraits and biographical sketches of thirty-six remarkable men and women of the second millennium are accompanied by an introduction detailing the process of becoming a saint, a listing of additional resources, and a glossary.