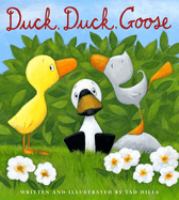 Duck and Goose face a challenge to their friendship when an enthusiastic young duck moves into their neighborhood who wants to play--and win--all sorts of games.

In Duck & Goose (2005), the characters became friends after tussling over a soccer ball. Here, their friendship is tested with another duck. Goose likes to meander through the meadow, but Duck's new friend, Thistle, has a competitive edge; she shows off her math skills, challenges Goose to a breath-holding contest, and proves she can stand on her head longer than anyone else. Duck is delighted, but Goose is worn out. The narrative doesn't really explain why Duck, after exhibiting such pleasure in Thistle, turns on her (though given the rather long text, Thistle's pushy enthusiasm may tire the audience, as well). Nevertheless, Duck finally seeks out Goose, and together they allow Thistle to win a new contest: she falls asleep first, and they go to play. The intrusive friend is a children's book staple, but here it plays out with cute rubber ducky-like characters, who exemplify what real kids feel. Sunny colors add to the appeal. Pair with Diane de Groat's Last One in Is a Rotten Egg (2007), about a competitive cousin. ((Reviewed March 1, 2007)) Copyright 2007 Booklist Reviews.

In this sequel to Duck & Goose , a domineering girl duckling threatens the friendship between the boyish title characters. As the drama begins, Goose stands in a marsh, waiting expectantly for Duck. He cannot wait to show Duck the blue butterfly that has alighted on his head. Duck, meanwhile, is planning his own show-and-tell. "Just wait until Goose meets Thistle," he thinks as he and a new friend visit "all his and Goose's favorite spots... the lily pond and the shady thicket." When Duck and Thistle race up to Goose, Thistle frightens the butterfly and boasts, "once, three butterflies landed on my head at the same time!... That's two more butterflies than you had!" Thistle challenges Goose to races and a handstand contest, winning with ease; Duck is impressed, Goose feels dejected, and Thistle pirouettes proudly. In sunny oil paintings of green grass and blue sky, Hills depicts the overeager newcomer proving herself and driving a wedge between the pals. His tale echoes Kevin Henkes's Chester's Way , however this third wheel is not just assertive but obnoxious; Thistle is unlikable and, more generally, an off-putting portrait of a bratty, oblivious girl. Duck and Goose reconcile and get some peace by challenging Thistle to a napping contest ("I'm the fastest faller asleeper ever!" she proclaims), then the buddies play while she sleeps. However, silencing the bully is but a temporary fix. The book points out a common dilemma, leaving readers to strategize solutions. Ages 3-7. (Jan.) [Page 49]. Copyright 2006 Reed Business Information.

PreS-Gr 2 Three's a crowd in this follow-up to Duck & Goose (Random, 2006). Duck is smitten with his new friend, Thistle, who claims to be the fastest, smartest, strongest duck around. Goose is not as enthusiastic about the newcomer. At first he gamely tries to participate in her incessant contests, but eventually he wanders off sadly to look for butterflies by himself. A worried Duck follows him, and the reunited companions agree that they prefer their usual quiet activities to Thistle's manic pursuits. Accordingly, they trick her into winning a napping contest and then gratefully sneak off to play by themselves. While the story provides an interesting and lighthearted exploration of the issue of loyalty between friends, the resolution seems problematic. What will happen when Thistle wakes up? Will the three of them work out a way to play together? Will Thistle be excluded, or will Duck be pressured into participating in her games again? Perhaps these questions could open a class (or family) discussion about relationships. In any case, Hills's gauzy oil paintings of a hazy, sunlit landscape and endearing animals make this a book worth lingering over with a good pal. Rachael Vilmar, Atlanta Fulton Public Library, GA [Page 97]. Copyright 2007 Reed Business Information.

Duck and Goose face a challenge to their friendship when an enthusiastic young duck moves into their neighborhood who wants to play--and win--all sorts of games.

Best friends Goose & Duck come to a crossroad when a new duck, Thistle, enters the picture and declares herself the best at everything, yet with Goose not liking this new addition, Duck feels the pressure and so knows that he will have to somehow smooth things out between them.

The beloved, classic, and New York Times-bestselling odd couple Duck & Goose are back, and this time their friendship is put to the test! Coming soon as an animated series, available to stream on Apple TV+!Duck & Goose, Goose & Duck. Feathered friends forever . . . or are they? You see, there's a challenge to their friendship: a little whippersnapper of a duck named Thistle. Thistle is good at everything (or so she thinks), from math to holding her breath to standing on her head. Duck thinks she's fantastic. But Goose does not! And so Goose is faced with a problem close to the hearts of children everywhere: What happens when your best friend makes a new friend?“Charming, funny, simple, and surprising. . . . Hills is master of the light comic touch.”—The Boston Globe