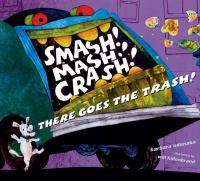 Another book about garbage trucks? Well, yes, but instead of focusing on a swaggering, loudmouthed vehicle, as Kate McMullan does in I Stink! (2002), this book stars a couple of pigs. Leaping out of bed early in the morning, the pigs watch two garbage trucks groaning, gobbling, and grinding as they make their noisy rounds. Hillenbrand's textured illustrations, in egg tempera and ink on canvas, depict the machines as giant, mechanical toads on wheels. The midnight-blue background gradually lightens to cream as daylight comes and the garbage workers (also pigs) pick up their loads, including cast-off furniture and dirty diapers. After the big buildup, the end is rather tame, but the rhyming text is as descriptive as the art ("Gooey, gloppy. / Slimy, sloppy. / Truck's a rolling bug buffet. / Flies a-buzzin' by the dozen-- / lapping up that cheese souffle").^B The antics^B of three dogs drooling after the trucks in anticipation of fallout extend the comedy. ((Reviewed December 1, 2006)) Copyright 2006 Booklist Reviews.

PreS-Gr 1 Rhythmic, rhyming language abounds as two piglets welcome the early-morning arrival of a pair of Rumbling, roaring garbage trucks. All of the offal details are here as the green behemoths gobble up everything from apple cores and dirty diapers to broken furniture. Smiling porcine workers, with Greasy glovesâ€¦sticky bootsâ€¦/stains a-plenty on their suits, feed the beasts while Flies a-buzzin'/by the dozen enjoy a feast at the rolling bug buffet. After completing all of the Crushing,/cramming,/screeching,/slamming, the vehicles thunder away, leaving the youngsters to re-create the action with their toy replicas. Done in ink and egg tempera on canvas, the vivacious two-page paintings convey the text's enthusiasm and energy. The trucks, shown from the rear and personified with mouthlike hoppers and red brakelight eyes, gleefully munch their way through an array of vividly colored refuse. The pigs are appealing, and readers can follow the antics of their dogs as they rush outside to be part of the fun. Pair this onomatopoeic offering with other tongue-tingling read-alouds, such as Kate McMullan's I Stink! (2002) and Andrea Zimmerman and David Clemesha's Trashy Town (1999, both HarperCollins), for a crash-bang storytime on a perennially popular topic. Joy Fleishhacker, School Library Journal [Page 107]. Copyright 2006 Reed Business Information.

Watching from their bedroom window, two pigs delight in all the excitement and noise below as burly garbage men gather, smash, trash, and bang their way down the street while throwing refuse of all shapes and sizes from the side of the road into their noisy truck.

THE GARBAGE TRUCKS ARE HERE TODAY!Smashing, mashing, lights a-flashing, gobblin' garbage,GULPITY-GULP. From castaway furniture to last night's leftovers, no job is too big or too small for this rugged team. With an upbeat, rhythmic text, Smash! Mash! Crash! There Goes the Trash! follows two garbage trucks on their route. What results is a stinky, roaring, rumbling mess -- and LOADS OF FUN!