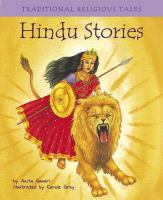 Gr 1-6 -Unlike the many religion books for young readers that focus upon the central tenets and rites as well as the cultural practices of its adherents, these titles are based on narratives. Buddhist zeroes in on the life and teachings of the Buddha, moving through his disenchantment and enlightenment and into less-familiar tales, such as that of the grieving Kisagotami or of a violent robber whose name means "finger necklace." In the case of Hinduism, Ganeri has selected significant and dramatic stories such as the creation of Ganesh and how he came to have an elephant's head; the birth of Krishna, an incarnation of Rama; and Durga's conquest of a shape-changing demon. While Islamic gives its greatest attention to events from the life of Muhammad, it also recounts stories from the more-distant past involving Musa/Moses, Ibrahim/Abraham, Isma'il/Ishmael, and Hajar/Hagar. The power and wisdom of Allah are central in these stories. Sikh also has a biographical focus, selecting important didactic lessons from the lives of the Sikh gurus to make their points. A noteworthy aspect of these stories is the prominence of Sikhism's stance against greed and those who use religion for self-aggrandizement. All four volumes have sidebars with additional information and small photographs. The illustrations, done in watercolor and pen and ink are merely competent, but Ganeri's writing is inviting and fluid. Libraries wanting more diverse information on world religions will find that these titles fit the bill nicely.-Coop Renner, Hillside Elementary, El Paso, TX [Page 125]. Copyright 2006 Reed Business Information.

Presents stories related to the Hindu religion, including tales about Hindu gods and goddesses.

A collection of stories coming from the Hindu religion.