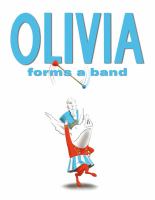 Olivia decides there has to be a marching band at the fireworks display, even if she has to do it herself.

PreS-Gr. 1. The irrepressible Olivia the pig returns for a fourth adventure. Shocked to discover there will be no band at that evening's fireworks display, Olivia decides to form a band herself--and if you think one piglet can't be a whole band, you obviously don't know this porcine powerhouse. Unfortunately, Falconer seems as easily distracted as his heroine this time around, and his extremely episodic story is little more than a series of setups for visual jokes. Though what result is essentially creative coasting, most children won't care, as Olivia remains an indisputably great character, and Falconer a master of antic line and situation. Devotees of previous books will also be pleased to see that to his usual palette of charcoals and reds Falconer has added a particularly winning shade of blue, and that he has incorporated photographs into many of his droll drawings. If only he had included more story . . . ((Reviewed June 1 & 15, 2006)) Copyright 2006 Booklist Reviews.

After demonstrating that she could perform in not one but all of the star attractions under the Big Top in Olivia Saves the Circus , the hoofed heroine here proves that she can be a one-piglet band. When Olivia discovers that there will be no band to accompany the summer fireworks, she announces, "I know! We'll be the band!" Once more, Falconer's mastery of detail and pacing results in outlandish comedy. On the left, a stop-action scene conveys the family's response--a wide-eyed look of panic; on the right-hand page, cat and dog take off in opposite directions, baby William crawls away, and Olivia's father hides behind a newspaper. " 'Fine,' said Olivia. 'I'll be the band.' " Falconer again uses his signature vignettes to comical effect in a kind of comic strip succession, as Olivia, sporting a red polka-dot union suit, gives baby William a bottle in exchange for his xylophone, and trades toddler Ian a cookie jar for his drum; a show-stopping sextet of spot illustrations depicts Olivia removing her father's suspenders to reveal red polka-dot boxers ("Look, Daddy, we're twins"). When Olivia emerges as a multi-tasking piglet in a sky-blue striped unitard, Daddy's suspenders (they hold the xylophone and drum in place) and a pot lid on each foot, a gatefold exhibits fantasy images of Olivia as drummer, flautist, tuba player and more, beneath four-plus measures of classic marching music. The band may not have made it to the picnic, but Olivia gets the last laugh--and so do readers. Another crowd-pleasing performance for the porcine starlet and her creator. Ages 3-7. (June) [Page 73]. Copyright 2006 Reed Business Information.

PreS-Gr 3 -The latest escapades of a precocious piglet and the mother who attempts to both nurture and civilize her opens on the morning of a fireworks display. The charcoal-and-gouache scenes with their signature red highlights on uncluttered white backgrounds depict Olivia's family, but readers are soon treated to a series of surprises that include the introduction of a new color (turquoise), collage elements, a fold-out, and full bleeds. When the protagonist declares that a band is essential for the evening's entertainment and that, lacking one, she'll fill in, her mother's thought bubble fills with a photograph of a leaping rock band; Olivia's depicts the marching variety. The fold-out starts with the heroine as the sole majorette and reveals a full-size band of Olivias, with the score of a Sousa-like march printed boldly above. Falconer builds to a crescendo of two and a half pages that portray a picnic at sunset followed by a dazzling display of feathery fireworks. These compositions are predominantly charcoal; the family members, backs to readers, are outlined in the reflected yellow glow of an ascending rocket. The palette returns to the original color scheme in the denouement, a bedtime moment to which all ages will relate. With perfectly nuanced dialogue and a mixture of comical and artful scenes, Falconer explores the logic, invention, and humor emanating from a talented youngster, serious about the mission of the moment.-Wendy Lukehart, Washington DC Public Library [Page 110]. Copyright 2006 Reed Business Information.

The divine--and vastly entertaining--diva is back in her latest adventure where she, forming a band from pots, pans, her brother's toys, and her father's suspenders, sets out to accompany a fireworks display. 400,000 first printing. $200,000 ad/promo.

Olivia decides that a marching band must accompany the fireworks display so she forms one from pots, pans, her brother's toys, and her father's suspenders.

Everyone's favorite Caldecott Honor-winning porcine diva is back and with fanfare! There are going to be fireworks tonight, and Olivia can hardly wait to hear the band. But when she finds out that there isn't going to be a band, she can't understand why not. How can there be fireworks without a band?! And so Olivia sets to putting a band together herself...all by herself. Using pots, pans, her brother's toys, and even her father's suspenders, Olivia forms a band spectacular enough to startle any audience. Lavishly brought to life in Ian Falconer's signature style, and introducing an eye-catching shade of blue, here is Olivia doing what Olivia does best -- making noise.