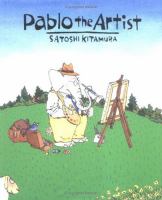 Pablo longs to have his painting displayed at an exhibition, and finds that all he needs is a little help from his friends.

K-Gr. 2. Pablo the elephant has a painting due at his art club but is sadly uninspired. Heading into the country to tackle a landscape, he paints an oak tree on a grassy field, and, sleepy, lies down for a nap. While he's snoozing, a sheep comes along and paints more delicious-looking grass, a squirrel adds a few nuts to the tree, some bees add flowers, and a passing wolf paints the woodland creatures in front of the tree. In an amusing twist, the elephant wakes up to an unadorned canvas--he's been dreaming! But now he knows exactly what to paint. Pablo's bucolic masterpiece ends up as the star of the art club exhibition. (And who's at the opening? The woodland creatures from his dream.) Kitamura exhibits a wonderful, distinctive use of line and color in his cartoonlike, stylized artwork. Hilarious visual details and comical touches abound in this clever story that playfully flips reality. ((Reviewed February 15, 2006)) Copyright 2006 Booklist Reviews.

Pablo, an elephant in a pale yellow suit and brown fedora, bears little stylistic resemblance to his Spanish namesake. He belongs to the pedestrian Hoof Lane Art Club, a suburban salon whose most daring member is a zebra with a passion for parallel lines. When Pablo suffers "artist's block," he strolls to a verdant field, paints a drab picture of a tree and takes a nap. While he sleeps, passing animals rate his handiwork (a thin ink frame around each page subtly suggests a fantasy suspension of Pablo's humdrum reality). The watery grass "looks completely tasteless!" to a sheep, who tints it "a delicious bright green." "No nuts! I see no nuts!" chatters a squirrel, who hops on the sheep's back to paint dots in the branches. The animals depart just as Pablo awakens and exclaims, "What a strange dream.... Now I know exactly what to do!," and gets back to work. The finished canvas goes unseen until the last moment, when Pablo displays it at an exhibition; readers will smile at his secret helpers, silently joining the gallery throng. As in Igor, the Bird Who Couldn't Sing , Kitamura imagines a character overcoming creative limitations, and his droll double-entendre clarifies what happened: "For Pablo it was a dream come true." Kitamura illustrates in his signature choppy, shaky ink lines and saturated colors. Thanks to Pablo's furred and feathered critics, readers notice what an unobservant painter might neglect when crafting a natural landscape. Ages 4-8. (Mar.) [Page 69]. Copyright 2006 Reed Business Information.

K-Gr 2 -The Hoof Lane Art Club is preparing for an exhibition of their work, and it is Pablo the elephantâ€™s dream to participate, but he is suffering from artistâ€™s block. After trying his hand at every sort of painting from still life to abstract, he heads for an empty field to attempt a landscape. He paints a simple tree, eats lunch, and falls asleep. In his dream, Pablo is visited by various animals, each with a perspective that improves his painting. When he wakes up, he creates a masterpiece. The story lacks the humor of Kitamuraâ€™s previous books and is disappointing. However, the illustrations are strong and the expressiveness of the characters lends much to the telling. Pablo is an earnest fellow, and the fact that he can still paint with his trunk while his hands are shoved in his pockets in frustration is a visual device used to great effect. The message that art is not created in a void might be missed by younger readers. However, the book offers a good platform from which to question children about where our ideas and inspirations come from, and as such would be suitable for storytime or classroom reading.-Kara Schaff Dean, Needham Public Library, MA [Page 104]. Copyright 2006 Reed Business Information.

Eager to find the inspiration he needs to start his work of art, Pablo the elephant heads out to the country to paint the perfect landscape, finds the perfect spot, and manages to succeed with the help of a few friendly passers-by.

Eager to find the inspiration he needs to start his work of art, Pablo the elephant heads out to the country to paint the perfect landscape--finding just the perfect spot and managing to succeed in his task with the help of a few friendly passers-by. 10,000 first printing.

Pablo the elephant has a problem. His art club is holding anexhibition, and all he has is an empty canvas. Plagued by artist’sblock, Pablo sets out for the country, in hopes of finding freshideas. But when he finishes his landscape, Pablo still isn’tsatisfied. It may just take the ingenuity of some friendlywoodland strangers to help Pablo realize his full artisticpotential.Bursting with the author’s inimitable illustrations, this is anuplifting story about teamwork and artistic vision.