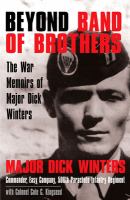 Beyond band of brothers

Stephen Ambrose's Band of Brothers (1992) and the HBO miniseries based on it made Easy Company--the 506th Parachute Infantry Regiment, which fought from D-Day to the end of World War II, with 150 percent casualties--well known to more than -military-history buffs. After both publication and broadcast, Winters, Easy Company's commanding officer, received many requests for more information. Feeling that much of the material Ambrose didn't use deserved an audience, he chose to air it and satisfy all those requests in his memoirs. For those to whom the story is familiar, the major and his collaborator developed an excellent narrative voice to recount Winters' experiences, actions, and thoughts during everything from training to deployment to battle to subsequent occupation. Winters has been praised as an exemplar of leadership, and here he shows what he did to earn that praise and how he did it. Very well done, book as well as war service. ((Reviewed February 15, 2006)) Copyright 2006 Booklist Reviews.

In his well-intentioned but impersonal memoirs, Winters tells the tales left untold by Stephen Ambrose, whose Band of Brothers was the inspiration for the HBO miniseries, but Winters's memoir is disappointingly sparse on details unrelated to troop position. It is in the battles and tactical maneuvers of Easy Company that Winters is most at home: on D-Day, when Easy Company's commanding officer is killed, Winters takes charge minutes after landing deep in German territory and leads an assault against a German battery. He carefully explicates the reasoning behind his strategy, leading the reader along as the Company attacks German machine gun and mortar outposts. The narrative is laced with Winters's soldierly exaltations of pride in his comrades' bravery: "My God, it's beautiful when you think of a guy who was so dedicated to his company that he apologizes for getting hit." Although the intrepidness of the group induces more than a tinge of pride, the memoir is devoid of powerful reflections. In the last, sluggish chapters, Winters devotes an excessive amount of time to letters he has received and to expositions on leadership. Winters is too humble for a genre that requires a little bit of conceit. (Mar.) Copyright 2006 Reed Business Information.

The commander of Easy Company provides a firsthand memoir of combat during World War II, describing the role of the "Band of Brothers" during the D-Day invasion, the march into Germany, and the liberation of an S.S. death camp.

The commander of Easy Company provides a firsthand memoir of combat during World War II, describing the role of a group immortalized as the "Band of Brothers" during the D-Day invasion, the Battle of the Bulge, the march into Germany, the liberation of an S.S. death camp, and beyond.

“Tells the tales left untold by Stephen Ambrose, whose Band of Brothers was the inspiration for the HBO miniseries...laced with Winters’s soldierly exaltations of pride in his comrades’ bravery.”—Publishers Weekly   They were called Easy Company—but their mission was never easy. Immortalized as the Band of Brothers, they suffered 150% casualties while liberating Europe—an unparalleled record of bravery under fire. Winner of the Distinguished Service Cross, Dick Winters was their legendary commander. This is his story—told in his own words for the first time.   On D-Day, Winters assumed leadership of the Band of Brothers when its commander was killed and led them through the Battle of the Bulge and into Germany—by which time each member had been wounded. Based on Winters’s wartime diary, Beyond Band of Brothers also includes his comrades’ untold stories. Virtually none of this material appeared in Stephen Ambrose’s Band of Brothers. Neither a protest against nor a glamorization of war, this is a moving memoir by the man who earned the love and respect of the men of Easy Company—and who is a hero to new generations worldwide.  Includes photos