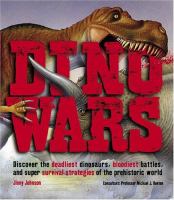 An illustrated introduction to the strengths and weaknesses of dinosaurs, including each animal's diet, skills, habitat, and the physical characteristics that would have enabled each dinosaur to defend itself.

Gr. 3-5. Let's face it. For many kids, much of dinosaurs' appeal stems from the way that they could attack each other with fearsome bodily weapons. Johnson's book celebrates this aspect of the great beasts by numerically rating dinosaurs according to their strength, armor, speed, agility, scariness, and special skills. Each dinosaur is given a nickname, reminiscent of pro wrestlers. Thus, Apatosaurus is pegged "Crusher," and Iguanodon becomes "The Jabber." Every few pages, readers are treated to an account of a dinosaur fight, usually with a well-armored plant eater trying to stave off a fearsome predator. Despite the gimmicks, a lot of information is imparted, and the book is loaded with appealing full-color illustrations. A final note about theories of dinosaur extinction and a glossary conclude a title that is sure to be appreciated by many dinosaur fans. ((Reviewed December 15, 2005)) Copyright 2005 Booklist Reviews.

Gr 4-7 -In a WWF smack-down format, Johnson presents a series of colorful confrontations. After delineating a spectrum of era-based "combat zones," she goes on to enumerate individual "assets" (strength, agility, armor, etc.) and rated "danger levels" (ranging from a paltry 2.7 for Scutellosaurus "aka Studs" to a high of 8.5 for Tyrannosaurus "aka Rex"). The featured matches span the ages from Permian predinosaurian Moschops vs. Lycaenops through a Jurassic Kentrosaurus vs. Allosaurus bout to a late Cretaceous battle between T. rex and Triceratops . In between these face-offs is a roster of would-be contenders, complete with realistic illustrations, vital statistics, distinguishing features, "combat histories," and "asset ratings." Included are marine reptiles, pterosaurs, crocodilians, and chelonians as well as the star players. Full of informative tidbits in explanatory captions and brief paragraphs of text, eye-catching with its colorful illustrations, and enticing in its combative concept, this title is not for the demander of in-depth data. However, for the dinophile, it is absolute pin-power on the page.-Patricia Manning, formerly at Eastchester Public Library, NY [Page 148]. Copyright 2006 Reed Business Information.

Presents an overview of the four ages of dinosaurs, providing detailed information about the physical characteristics, habitat, distinguishing features, and combat history of the many types of dinosaurs who lived during these periods.