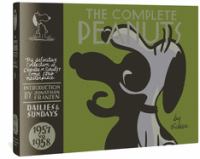 Collects the comic strip Peanuts, featuring the misadventures of Charlie Brown, Snoopy, and the rest of the gang, from 1957 to 1958. Includes an essay on Charles Schulz' life.

The best-known, most-beloved "kid strip" is, of course, Peanuts, which graced newspaper comics sections for 50 years until artist Charles Schulz's death in 2000. This volume in Fantagraphics' series reprinting the strip's entire run covers 1957 and 1958, by which time its essentials were well established. The characters are what they would continue to be for four more decades: Lucy, bossy and selfish; Linus, quiet and grave; Snoopy, humbly whimsical; and, most important, Charlie Brown, utterly Charlie Brownish. Take that back a bit about Snoopy, who, as novelist Jonathan Franzen points out in the introduction, here begins his transition from recognizably canine ball fetcher and people licker to a near anthropomorph that impersonates other species and plays the violin atop Schroeder's piano ("Little by little," Charlie Brown observes, "that dog seems to be losing his mind"). Schulz's drawing style here is solider than it would be in later years, when the strip grew visually sparer yet even more expressive. Even these early strips, though, put to shame anything in the funny pages today.The latest compilation of the comic book Little Lulu reprints four 1947 issues in sharp black and white. Like Peanuts, Little Lulu is about suburban childhood, which its simple stories render as, essentially, an idyll. Lulu and her friends play hooky, bring home stray dogs, wage snowball fights, and steal apples from a neighbor's tree. In the hands of comics master Stanley, who wrote and laid Lulu out, those mundane activities are the stuff of artful hilarity. Although more than a half-century old, they seldom seem dated (well, one story does; in it Lulu and her pal Tubby are transfixed when they see a TV set for the first time). Stanley's tykes are more genuinely childlike than the Peanuts--no pint-sized philosophers among them--and unlike in Peanuts, adults feature prominently in Lulu, some of the funniest moments arising from parents' bemused reactions to the kids' high jinks. Schulz is droll and understated; Stanley, exuberant and clever; but the main difference is that Peanuts tells four-panel, character-based gags; Lulu, more leisurely narratives. ((Reviewed September 1, 2005)) Copyright 2005 Booklist Reviews.

A new volume of Peanuts comics follows such plot developments as Linus's maturity into a speaking and blanket-wielding character and Charlie Brown's continuing downfall in the face of numerous lost kites and baseball games.

Collects all the "Peanuts" comic strips published from 1957 to 1958 in newspapers, including both daily and Sunday strips.

As the 1950s close down, Peanuts definitively enters its golden age. Linus, who had just learned to speak in the previous volume, becomes downright eloquent and even begins to fend off Lucy's bullying; even so, his security neurosis becomes more pronounced, including a harrowing two-week "Lost Weekend" sequence of blanketlessness. Charlie Brown cascades further down the hill to loserdom, with spectacularly lost kites, humiliating baseball losses (including one where he becomes "the Goat" and is driven from the field in a chorus of BAAAAHs); at least his newly acquired "pencil pal" affords him some comfort. Pig-Pen, Shermy, Violet, and Patty are also around, as is an increasingly Beethoven-fixated Schroeder. But the rising star is undoubtedly Snoopy. He's at the center of the most graphically dynamic and action-packed episodes (the ones in which he attempts to grab Linus's blanket at a dead run). He even tentatively tries to sleep on the crest of his doghouse roof once or twice, with mixed results. And his imitations continue apace, including penguins, anteaters, sea monsters, vultures and (much to her chagrin) Lucy. No wonder the beagle is the cover star of this volume.