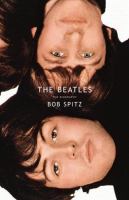 The Beatles The biography

In just under 1,000 pages, Spitz offers a fresh, terrifically entertaining perspective on the world's most famous rock group. The book is packed with details and anecdotes that bring the Fab Four to life. Immensely talented but humanly flawed, they created remarkable music during an extraordinary time and were often caught up in events and circumstances beyond their control. At first amused by Beatlemania, their attitudes changed to horror when the roar of the crowds came to include death threats, and obligations became unrelenting. Spitz retells many familiar stories: when John met Paul, the triumph in America, the infamous "butcher cover" of ^Yesterday and Today, the debacle in Manila where the Beatles unintentionally jilted First Lady Imelda Marcos, the Beatles-are-more-popular-than-Jesus comment, the remarkable response to Sgt. Pepper's Lonely Hearts Club Band, manager Brian Epstein's death, and the breakup. Good though less well known is the meeting with Elvis in the King's rented house in Bel Air, California; the Beatles, nervous in the presence of a boyhood idol, were unsure about how to act and resorted to embarrassing silence. Spitz's group portrait should now be considered the definitive Beatles biography, especially for new generations of Beatles enthusiasts. ((Reviewed September 15, 2005)) Copyright 2005 Booklist Reviews.

There are hundreds of Beatles books, but this one reputedly is no cut-and-paste job, relying on multitudinous new interviews and previously untapped sources. Copyright 2005 Reed Business Information.

Surprisingly, relatively few of the hundreds of Beatles books over the years comprehensively document the band's story. Spitz (Dylan: A Biography ) claims to have written the definitive work, and it is certainly far more detailed than Philip Norman's Shout! , the last serious attempt by an outsider to tell the Beatles' tale. Spitz spent several years cobbling together the story from new interviews with old Beatle friends and hundreds of existing sources (including discredited John Lennon biographer Albert Goldman's archives, which may raise eyebrows). The band's family histories and early years are told with flair and fairness in unprecedented depth--this is the book's biggest contribution to Beatles scholarship. But once Beatlemania hits, Spitz loses steam: the group doesn't even invade America until well over halfway through the narrative. As familiar stories of the Beatles' prime years take over, sloppy, head-scratching errors start to creep in; certain stories ingrained in Beatles legend, such as how they arrived at the finished recording for "Strawberry Fields Forever," are ignored. With the band sinking into dysfunction, Spitz relies more heavily on sources that take a negative tone, and the book sputters to an abrupt end, ignoring the lawsuit that Paul McCartney filed against the others to dissolve their partnership formally. Despite these flaws, The Beatles emerges as the most complete chronicle of the Fab Four to date, at least until Mark Lewisohn finishes his massive three-volume Beatles biography in 2016. [See Prepub Alert, LJ 7/05; see also Larry Kane's Lennon Revealed , p. 66.]--Lloyd Jansen, Stockton-San Joaquin Cty. P.L., CA [Page 67]. Copyright 2005 Reed Business Information.

With this massive opus, veteran music journalist Spitz (Dylan: A Biography ) tells the definitive story of the band that sparked a cultural revolution. Calling on books, articles, radio programs and primary interviews, Spitz follows the band from each member's family origins in working-class Liverpool to the band's agonizing final days. Spitz's unflinching biography reveals that not only did the Beatles pioneer a new era of rock but they also were on the cutting edge of rock star excess, from their 1961 amphetamine-fueled sets in the clubs of Hamburg to their eventual appetites for stronger drugs, including marijuana, LSD, cocaine and, eventually for John Lennon, heroin. Sex was also part of the equation; in 1962, when the band cut its first audition for Sir George Martin, all four members had a venereal disease, and both John's and Paul McCartney's girlfriends were pregnant. Spitz details the tangled web of bad business deals that flowed from novice manager Brian Epstein (though the heavily conflicted Epstein can be forgiven since he was in uncharted territory). Although this is a hefty volume steeped in research, Spitz writes economically, and with flair, letting the facts and characters speak for themselves. In doing so, he captures an ironic sadness that accompanied the Beatles' runaway success--how their dreams of stardom, once realized, became a prison, forcing the band to spend large parts of their youth in hotel rooms to avoid mobs and to stage elaborate escapes from literally life-threatening situations after appearances. As with all great history writing, Spitz both captures a moment in time and humanizes his subjects. While some will blanch at the unsettling dark sides of the Beatles, most will come to appreciate the band even more for knowing the incredible personal odysseys they endured. 32 pages of b&w photos. Agent, Sloan Harris. 196,500 first printing; major ad/promo. (Nov. 7) [Page 64]. Copyright 2005 Reed Business Information.

Challenging popular myths attributed to the Beatles, an extensively researched band portrait traces their individual experiences of rising from young, angry rock-and-roll musicians to fame, in an account that endeavors to provide balanced coverage of all four members. 300,000 first printing.

Spitz restores the Beatles to what they were: a loud, angry rock and roll band, kids that became gods, not gods who happened to look like kids. This is a biography of the band in full, not merely the story of John and Paul and their two mates from Liverpool.