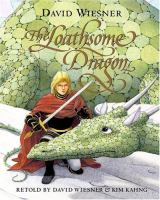 A wicked queen casts a spell over her beautiful stepdaughter, turning her into a loathsome dragon until such time as her wandering brother shall return and kiss her three times.

PreS-Gr. 2. This revision of a 1987 fairy tale about a princess whose jealous stepmother transforms her into a dragon features a slightly retooled text and illustrations. The words have been condensed and modernized, producing a smoother read-aloud, and some of the original text's old English flourishes are gone: "If I'm not won ere set of sun" is now "If I'm not changed by set of sun." In addition, the prince's original name, Childe Wynde, has been changed to the more recognizable Richard. The authors also amplify the suspense by setting a new deadline: if the princess' spell isn't broken within a year, she'll remain a dragon forever. Wiesner's illustrations are as delightful as ever; only two are new, showing scenes from slightly different perspectives, but the reproductions appear crisper and more vivid than in the old edition. A fine replacement for collections' battered and much-loved copies. ((Reviewed February 15, 2005)) Copyright 2005 Booklist Reviews.

Wiesner (Tuesday) and Kahng, his wife, give a straight account of a British fairytale and, unfortunately, Wiesner's illustrations show few of the high jinks and visual jests that characterize his previous work. The title dragon is actually the Princess Margaret, spellbound by her jealous stepmother. The king's new wife turns out to be an enchantress who summons hollow-eyed wraiths from the castle dungeon ("Nine times nine she passed her arms before herself, and three times three she chanted her evil spell"). The terrorized subjects consult a wizard, who explains that only Margaret's brother can return her to her human form. When the prince journeys back by sea, he is thwarted by the dragon ("This beast cannot be Margaret... for she would never oppose me so"), and is surprised to hear the creature speak in his sister's voice ("Oh, quit your sword, forget your fear/ And give me kisses three,/ For though I am a loathsome beast,/ No harm I'll do to thee"). Wiesner's pastel-tinted paintings dutifully provide the full panoply of fairytale props (knightly equipage, castle turrets with flying banners), but only in two spreads does the artist's signature wizardry emerge: castle maids swoon in comic horror when they enter Margaret's room to discover yards of the serpentine dragon; and, later, the snowy-haired wizard conjures his alchemical texts, which hang before him in mid-air, while a glowing image of the princess trapped within the dragon's coils appears in their midst. For a book that relies on magic, sadly, there's very little here. Ages 5-8. (Apr.) Copyright 2005 Reed Business Information.

K-Gr 3-Wiesner and Kahng's 1987 retelling of a retelling of an English folktale based on an 18th-century ballad has been revised with a briefer, more accessible text, some reworked illustrations, a new cover, and an added source note. With her brother Richard (Childe Wynd in the earlier version) gone to see the world, Princess Margaret is left to console her widowed father until his remarriage to a beautiful enchantress. Consumed by jealousy, the new queen turns Margaret into a Loathsome Dragon that terrorizes the kingdom. With advice from a mighty wizard, the people keep the dragon's hunger under control and send a message to Prince Richard to return as only he can break the spell. Despite the queen's attempt to foil this plan, Richard manages to reverse the enchantment, freeing Margaret and turning the queen into a Loathsome Toad by means of a magic rowan twig. The artwork in this version is more vivid, and the softly colored and patterned frames have been replaced with white borders that make the pictures less remote. As in the original, the dragon seems intentionally benign rather than loathsome, suggesting the trapped princess within. The uncomplicated telling and appealing double-page paintings make this a good introduction to the folk genre.-Marie Orlando, Suffolk Cooperative Library System, Bellport, NY Copyright 2005 Reed Business Information.

A wicked queen casts a spell over her beautiful stepdaughter, turning her into a loathsome dragon until such time as her wandering brother shall return and kiss her three times.

Now available once again—with several new illustrations, revised text, and a brief source note—this picture-book classic will delight David Wiesner’s many fans, and win him a generation of new ones.