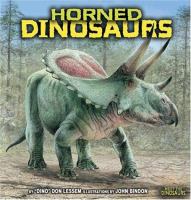 Describes how triceratops, torosaurus, and other horned dinosaurs lived, as well as how scientists have learned about them through fossil studies.

Gr 2-4-Each title looks at several examples of species with similar physical characteristics. The opening pages provide fast facts about the species, a time line, and a map showing where their fossils have been found. Using the present tense, the author describes a series of scenes that demonstrate the qualities of these dinosaurs, as when Ankylosaurus tries to use its armor to survive a Tyrannosaurus rex attack. Other pertinent facts, such as the importance of Ankylosaurus's weight and squatting ability, are woven smoothly into the narrative. The large, colorful illustrations show the animals in action but are also clear enough to distinguish the key features. The lively conversational tone works well for the intended audience and is nicely balanced by the well-organized presentation of facts. Large, double-spaced type and fairly simple sentence structure add to the appeal. Each title touches on fossils and addresses the disappearance of dinosaurs without overwhelming readers with details. Species classification is also kept at an appropriately basic level, sticking to "horned dinosaurs" and their common traits, rather than introducing the term Ceratopsians and looking more closely at species distinctions. These titles meet the perennial need for dinosaur books that offer the right combination of information and action.-Steven Engelfried, Beaverton City Library, OR Copyright 2005 Reed Business Information.

Describes how triceratops, torosaurus, and other horned dinosaurs lived, as well as how scientists have learned about them through fossil studies.