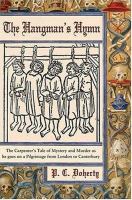 Doherty continues his series starring the characters from Chaucer's Canterbury Tales telling the stories Chaucer didn't collect. This time, the carpenter entertains his fellow pilgrims with a frightening story of deception and intrigue involving corrupt hangmen and witches. It seems that not all of those hanged in Gloucester die. When a coven of witches living in the nearby woods goes on a murderous rampage, the judges sentence them to death, but they somehow survive and plot revenge. The carpenter, an apprentice hangman, must figure out what happened before he and everyone else involved in the trial are killed for retribution. As always, Doherty is a master at re-creating the historical period. He captures the eerie atmosphere of the woods, the fear of simple folk who truly believe in the power of evil forces, and the mix of fun and solemnity that sets the mood as the pilgrims travel. A sure thing for fans of medieval mysteries. ((Reviewed December 15, 2004)) Copyright 2004 Booklist Reviews.

Prolific British author Doherty, whose historicals have ranged as far back in time as ancient Egypt and the age of Alexander the Great, offers an entertaining medieval mystery, the fifth in a series (An Ancient Evil, etc.) in which Chaucer's Canterbury pilgrims, in the dark of night, trade ghost stories. Three hangings prompt the carpenter to tell a frightening tale of murder, corruption and witchcraft. The carpenter's woodworker hero, Simon Cotterill, who may or may not be "fictional," is forced to join a Gloucester guild of executioners to avoid destitution. The brutal routine of Cotterill's new career is interrupted when the mayor orders the hangmen, under orders of strict secrecy, to execute three witches accused of a string of murders. The hangings, far from ending the menace, result in even more death, and Cotterill is forced to track down the mysterious coven leader responsible. More successful as an occasionally creepy atmospheric thriller than as a whodunit, this entry again demonstrates Doherty's gift for evoking the past. Agent, Sarah Thompson. (Jan. 3) Copyright 2004 Reed Business Information.

Having witnessed a murder with possible supernatural ties when he was an apprentice, the Carpenter works to solve an intricate mystery involving a purported witch coven leader who would avenge the deaths of her sisters.

Having witnessed a murder with possible supernatural ties when he was an apprentice, the Carpenter works to solve an intricate mystery involving a purported witch coven leader who would avenge the deaths of her sisters. By the author of Corpse Candle and Slayers of Seth.

In this historical mystery series, the characters from Chaucer's immortal Canterbury Tales pick up where they left off, this time to tell their own personal stories of horror and mystery as they entertain each other - and scare the stuffing out of each other - on the long pilgrimage road to Canterbury.This time, it's the Carpenter's turn to relive his worst nightmare: a chilling saga of betrayal and deception, and maybe supernatural murder, that he witnessed firsthand as a young apprentice carpenter outside Gloucester. Run out of town by thugs working for his would-be father-in-law, the carpenter joined the desperados in the local hangman's crew - one short after one of their own colleagues found himself hanging in a gibbet.It was soon clear that the executioners were in for a big job. Somebody had been murdering young women from the forest paths around Gloucester, and when the good townspeople hauled in three disfigured hags - witches, they said - the mayor and his acolytes arranged for a quiet midnight trial that would take care of the problem as quickly, and as quietly, as possible.However, when the hangmen got the so-called witches out to the forest, even they were scared off by bone-chilling night sounds, and the condemned were left hanging - but maybe not dead. With the witches' supposed coven leader on the warpath, exacting a bloody revenge on all the men who'd done her sisters in, the Carpenter alone could solve an increasingly intricate mystery and stop the murderers from claiming more victims.