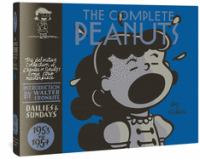 The second volume in a series reprinting the 50-year run of the beloved comic strip Peanuts sees the cast continuing to develop into the characters that won worldwide affection. In these 1953-54 strips, Lucy is younger than most of the other kids, and Linus is an infant with a propensity for toppling over. Snoopy is thoroughly doglike, fetching balls and howling at the moon. Charlie Brown is already the put-upon victim, and Lucy an inveterate fussbudget. All the kids behave like kids--1950s kids, who play cowboys and Indians, spacemen, and jump rope. Occasionally, the humor is topical, with a Liberace gag here, an H-bomb reference there (Schulz soon realized that such things detracted from the strip's timeless quality). The most notable additions of 1953-54 are perpetually messy Pig Pen and Linus' security blanket. Though Schulz continued refining the strip, his blend of quiet humor and psychological insight was there from the beginning. As Walter Cronkite notes in the introduction, "with those few short lines, he created a panorama of life's experiences." ((Reviewed October 15, 2004)) Copyright 2004 Booklist Reviews.

This second thick volume in The Complete Peanuts makes for a delicious wallow in a nostalgic world that has a lot more bite than readers may recall. Although some feel that Schulz's later work assumed a certain predictability, his early strips are undeniably crackling. Schulz portrays a children's world that's anything but idyllic, complete with fusspots, tortured artists, exclusive clubs, insecurities and kites that refuse to fly. One strip shows Lucy destroying Charlie Brown's puzzle, kicking Schroeder's piano and stomping on Linus's cookies; the final panel shows her fleeing, pursued, moaning, "I'm frustrated and inhibited and nobody understands me." Another strip depicts the harsh reality of unpopularity; the illustration shows section after section of fence scrawled with graffiti that reads "Linus loves Violet. Shermy loves Patty. Lucy loves Schroeder. Charlie Brown loves Charlie Brown." It's said Schulz's work draws on his own experiences, and this becomes especially clear when Charlie Brown himself decides to draw a comic strip and doesn't get the public response he'd hoped for. (His work is about a man who decides to ride across the country on a lawn mower.) The Peanuts landscape is the familiar neighborhood, with trees, sidewalks, sandboxes, ball fields and remarkably generic interiors. As always, the illustrations are a marvel of simplicity and the insights are haunting. (Oct. 5) Copyright 2004 Reed Business Information.

The second volume of the complete Peanuts collection contains 730 comic strips and chronicles such happenings as the introduction of Pigpen and the establishment of Lucy as a chronic troublemaker.

Collects all the "Peanuts" comic strips published in newspapers from 1953 to 1954, including both daily and Sunday strips.

The second volume in the most eagerly-anticipated publishing project in the history of the American comic strip: the complete reprinting of Charles M. Schulz's 50-year American classic, Peanuts.

The second volume is packed with intriguing developments, as Schulz continues to create his tender and comic universe. It begins with Peanuts' third full year and a cast of eight: Charlie Brown, Shermy, Patty, Violet, Schroeder, Lucy, the recently-born Linus, and Snoopy. By the end of 1954, Pigpen and his dust cloud join the crowd. Linus, who still doesn't speak, begins to emerge as one of the most complex and endearing characters in the strip: garrulous and inquisitive yet gentle and tolerant. And, in this volume, he acquires his security blanket! Charlie Brown is becoming his best-known self, the lovable, perpetually-humiliated round-headed loser, but he hasn't yet abandoned his brasher, prankish behavior from Volume One. And, Lucy, this book's cover girl, has grown up and forcefully elbowed her way to the center of the action, proudly wearing her banner as a troublemaker, or, in Schulz's memorable phrase, a "fussbudget". For readers unfamiliar with the early years of the strip, Snoopy's appearances here may come as the biggest surprise: he behaves, for the most part, like a dog! But, although he doesn't yet walk upright, sleep on top of his doghouse, or possess a fantasy life, Snoopy has started thinking for himself and his evolution continues its fascinating course within these pages. If you watch carefully, you'll catch his very first shark impression. The vast majority of the daily and Sunday strips collected here are not currently available in any in-print Peanuts collection. Dozens of them have not been reprinted since their initial appearance in newspapers over 50 years ago.2005 Eisner Award Winner, Best Archival Collection/Project; 2005 Eisner Award Winner, Best Publication Design (Seth).