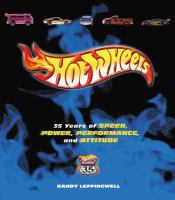 Silver Medal Winner at 2004 International Automotive Media Awards!In the 1960s, diecast cars and trucks were simple, stodgy, and clunky. They were hobby items, not toys, often displayed but seldom played with. They lacked "play value." Enter Mattel. In 1968 they introduced the first 18 Hot Wheels(tm) cars to the world. The vehicles were cool looking, they were well-detailed, and most of all, they could go like heck. Following the vision of a courageous leader and a creative group of designers, engineers, and marketers, Mattel revolutionized the diecast world with its 1/64th-scale cars on hot mag wheels that could move at speeds far beyond their competition.Thirty-five years and a few billion cars later, Hot Wheels(tm) cars are still number one. These junior racers are very hot collectibles and favorite toys for kids of all ages. Mattel celebrates the 35th anniversary of Hot Wheels(tm) in 2003, and author Randy Leffingwell takes you through their complete history from the early planning to the latest cars coming off the line. With full access to Mattel resources, including the top-secret Hot Wheels(tm) Design Center, Leffingwell reveals who made the cars go fast, who came up with the colors, the names, the logos, and the unique models. Interviews with more than 70 individuals-including Mattel founder and Hot Wheels(tm) creator Elliot Handler as well as legendary designers like Harry Bradley, Ira Gilford, and Larry Wood-allow the story to be told through the words of those who were there making Hot Wheels(tm) history. This highly illustrated book is filled with images of rare design drawings and prototypes, plus photos of all your favorite Hot Wheels(tm) cars., This book is the official, licensed, complete Hot Wheels(tm) history. , Illustrated with design drawings, photos of original wood molds and brass prototypes, and many other rare memorabilia from Hot Wheels(tm) history., Includes interviews and first-hand accounts from the people who were there from the very beginning as well as those who designed the cars.