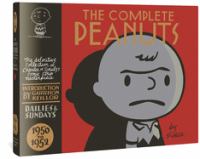 Peanuts fans who wanted larger doses of the beloved comic strip than their daily newspaper fix afforded have hitherto had to make do with haphazard paperback collections. Now, however, Peanuts' entire 50-year run is to be reprinted in chronology in uniform hardcover volumes, with two years' worth of daily and Sunday episodes in black-and-white per book. As the inaugural strips in this volume show, Schulz plied his successful formula of having children convey adult thoughts and emotions from the beginning, and the underlying melancholy that set Peanuts apart on the comics page was there from the outset. Still, though Charlie Brown was immediately the everyman heart of the strip, other aspects weren't fully developed; for instance, Schroeder and Linus were at first infants. Of special interest to librarians is the volume's index, featuring such entries as "baseball," "Beethoven," and "blockhead, first use of"; perhaps this is a first in a comic-strip collection. Now that Schulz's classic is finally getting its bibliographic just deserts, consider replacing those tattered old Peanuts paperbacks with this definitive series. ((Reviewed April 1, 2004)) Copyright 2004 Booklist Reviews.

Legions of fans, including this reviewer, have been hoping for this book their entire lives; finally, the most popular comic strip of all time is being collected complete. Over the years, there have been hundreds of books collecting this much-beloved strip, but still about 2000 Peanuts installments have never been reprinted in book form before. Before his death, Schulz finally set aside his dislike for his formative earliest work and agreed to this landmark project. Fantagraphics will be issuing two books a year, with each book covering two years of the strip's 50-year history. This first volume includes an introduction by Garrison Keillor, artful book design by cartoonist Seth, a lengthy interview with Schulz, and even an index of the strips. It also includes the first appearances of some of the best-known comics characters in the world: Charlie Brown, Snoopy, Linus, and Lucy. Some of these early strips are about children doing childish things, but it's amazing how quickly Schulz's signature themes of insecurity, dread, and children speaking beyond their years enter into the picture. Featuring hundreds of strips that will be new to almost every fan, this is a treasure, a delight, a rare gem. Absolutely essential for every library. Copyright 2004 Reed Business Information.

With its ambitious plan to reprint all of "Peanuts" in chronological order over the next 12 years, Fantagraphics is making this comics masterpiece available for everyone. The real surprise of this first volume is watching the beloved comic strip develop from its embryonic stage. From the start, Schulz had some of the ground rules in place: the ensemble cast whose faces appeared only in profile or three-quarter views, the sophisticated language from the mouths of babes and the absence of visible adults from their world. But, although "good ol' Charlie Brown" appears in the very first strip, the early protagonist is the rather colorless Shermy. Lucy is a googly-eyed baby in a playpen; Linus and Schroeder are pre-verbal infants; and Snoopy is just a small, affectionate dog without a fantasy life. Even more odd, the strip's unique hilarity hasn't quite developed yet; most of the humor here is very mild and generally stems from the characters being little kids playing with each other and fooling around with grown-up roles. They're archetypes of children, not yet archetypes of humanity. Still, flashes of Schulz's later greatness are evident. All the characters show hints of the personalities they'll grow into, and Schulz's clean, magisterially expressive line falls into position by the end of the strip's second year. Regardless, the chance to see the early "Peanuts"-much of it never before reprinted-is a treat. (Apr.) Forecast: An introduction by Garrison Keillor and the book's handsome design (by artist Seth) help make this a package with mass appeal. Copyright 2004 Reed Business Information.

Collects all the "Peanuts" comic strips published from 1950 to 1952 in newspapers, including both daily and Sunday strips.

The first volume in the bestselling archival series collecting the mostbeloved comic strip ever. Many of these formative strips have neverbeen collected or reprinted anywhere else. Introduction by GarrisonKeillor.