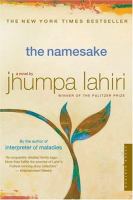 Lahiri's short story collection, Interpreter of Maladies, won the 2000 Pulitzer Prize, and her deeply knowing, avidly descriptive, and luxuriously paced first novel is equally triumphant. Ashoke Ganguli, a doctoral candidate at MIT, chose Gogol as a pet name for his and his wife's first-born because a volume of the Russian writer's work literally saved his life, but, in one of many confusions endured by the immigrant Bengali couple, Gogol ends up on the boy's birth certificate. Unaware of the dramatic story behind his unusual and, eventually, much hated name, Gogol refuses to read his namesake's work, and just before he leaves for Yale, he goes to court to change his name to Nikhil. Immensely relieved to escape his parents' stubbornly all-Bengali world, he does his best to shed his Indianness, losing himself in the study of architecture and passionate if rocky love affairs. But of course he will always be Gogol, just as he will always be Bengali, forever influenced by his parents' extreme caution and restraint. No detail of Nikhil's intriguing life is too small for Lahiri's keen and zealous attention as she painstakingly considers the viability of transplanted traditions, the many shades of otherness, and the lifelong work of defining and accepting oneself. ((Reviewed June 1 & 15, 2003)) Copyright 2003 Booklist Reviews

This first novel is an Indian American saga, covering several generations of the Ganguli family across three decades. Newlyweds Ashoke and Ashima leave India for the Boston area shortly after their traditional arranged marriage. The young husband, an engineering graduate student, is ready to be part of U.S. culture, but Ashima, disoriented and homesick, is less taken with late-Sixties America. She develops ties with other Bengali expatriates, forming lifelong friendships that help preserve the old ways in a new country. When the first Ganguli baby arrives, he is named Gogol in commemoration of a strange, life-saving encounter with the Russian writer's oeuvre. As Gogol matures, his unusual name proves to be a burden, though no more than the tensions and confusions of growing up as a first-generation American. This poignant treatment of the immigrant experience is a rich, stimulating fusion of authentic emotion, ironic observation, and revealing details. Readers who enjoyed the author's Pulitzer Prize-winning short story collection, Interpreter of Maladies, will not be disappointed. Recommended for public and academic libraries. [Previewed in Prepub Alert, LJ 5/15/03.]-Starr E. Smith, Fairfax Cty. P.L., VA Copyright 2003 Reed Business Information.

Freshly arrived from India in 1960s Cambridge, MA, the Gangulis are so culture-shocked that they name their firstborn Gogol. This first novel hardly feels like a debut; Lahiri won a rafter of prizes (including a Pulitzer) for her story collection, Interpreter of Maladies. Copyright 2003 Reed Business Information.

One of the most anticipated books of the year, Lahiri's first novel (after 1999's Pulitzer Prize-winning Interpreter of Maladies) amounts to less than the sum of its parts. Hopscotching across 25 years, it begins when newlyweds Ashoke and Ashima Ganguli emigrate to Cambridge, Mass., in 1968, where Ashima immediately gives birth to a son, Gogol-a pet name that becomes permanent when his formal name, traditionally bestowed by the maternal grandmother, is posted in a letter from India, but lost in transit. Ashoke becomes a professor of engineering, but Ashima has a harder time assimilating, unwilling to give up her ties to India. A leap ahead to the '80s finds the teenage Gogol ashamed of his Indian heritage and his unusual name, which he sheds as he moves on to college at Yale and graduate school at Columbia, legally changing it to Nikhil. In one of the most telling chapters, Gogol moves into the home of a family of wealthy Manhattan WASPs and is initiated into a lifestyle idealized in Ralph Lauren ads. Here, Lahiri demonstrates her considerable powers of perception and her ability to convey the discomfort of feeling "other" in a world many would aspire to inhabit. After the death of Gogol's father interrupts this interlude, Lahiri again jumps ahead a year, quickly moving Gogol into marriage, divorce and a role as a dutiful if a bit guilt-stricken son. This small summary demonstrates what is most flawed about the novel: jarring pacing that leaves too many emotional voids between chapters. Lahiri offers a number of beautiful and moving tableaus, but these fail to coalesce into something more than a modest family saga. By any other writer, this would be hailed as a promising debut, but it fails to clear the exceedingly high bar set by her previous work. Agent, Eric Simonoff. (Sept. 16) Forecast: Lahiri's previous collection is beloved by booksellers and readers alike, and despite the likely lukewarm reviews, orders and sales are sure to soar for this one. Lahiri, who appeared awkward working the crowd at BEA, may take some time to warm up to audiences on the road. Foreign rights sold in 12 countries. Copyright 2003 Reed Business Information.

Adult/High School-A novel about assimilation and generational differences. Gogol is so named because his father believes that sitting up in a sleeping car reading Nikolai Gogol's "The Overcoat" saved him when the train he was on derailed and most passengers perished. After his arranged marriage, the man and his wife leave India for America, where he eventually becomes a professor. They adopt American ways, yet all of their friends are Bengalis. But for young Gogol and his sister, Boston is home, and trips to Calcutta to visit relatives are voyages to a foreign land. He finds his strange name a constant irritant, and eventually he changes it to Nikhil. When he is a senior at Yale, his father finally tells him the story of his name. Moving to New York to work as an architect, he meets Maxine, his first real love, but they separate after his father dies. Later, his mother reintroduces him to a Bengali woman, and they fall in love and marry, but their union does not last. The tale comes full circle when the protagonist, home for a Bengali Christmas, rediscovers his father's gift of Gogol's short stories. This novel will attract not just teens of other cultures, but also readers struggling with the challenges of growing up and tugging at family ties.-Molly Connally, Chantilly Regional Library, VA Copyright 2003 Reed Business Information.

An incisive portrait of the immigrant experience follows the Ganguli family from their traditional life in India through their arrival in Massachusetts in the late 1960s and their difficult melding into an American way of life, in a debut novel that spans three decades, two continents, and two generations. By the Pulitzer Prize-winning author of Interpreter of Maladies. Reprint.

A portrait of the immigrant experience follows the Ganguli family from their traditional life in India through their arrival in Massachusetts in the late 1960s and their difficult melding into an American way of life.

"Dazzling...An intimate, closely observed family portrait."'The New York Times "Hugely appealing."'People Magazine "An exquisitely detailed family saga."'Entertainment Weekly Meet the Ganguli family, new arrivals from Calcutta, trying their best to become Americans even as they pine for home. The name they bestow on their firstborn, Gogol, betrays all the conflicts of honoring tradition in a new world'conflicts that will haunt Gogol on his own winding path through divided loyalties, comic detours, and wrenching love affairs. In The Namesake, the Pulitzer Prize winner Jhumpa Lahiri brilliantly illuminates the immigrant experience and the tangled ties between generations.

"Dazzling...An intimate, closely observed family portrait."—The New York Times "Hugely appealing."—People Magazine "An exquisitely detailed family saga."—Entertainment Weekly Meet the Ganguli family, new arrivals from Calcutta, trying their best to become Americans even as they pine for home. The name they bestow on their firstborn, Gogol, betrays all the conflicts of honoring tradition in a new world—conflicts that will haunt Gogol on his own winding path through divided loyalties, comic detours, and wrenching love affairs. In The Namesake, the Pulitzer Prize winner Jhumpa Lahiri brilliantly illuminates the immigrant experience and the tangled ties between generations.

Jhumpa Lahiri's debut story collection, Interpreter of Maladies, took the literary world by storm when it won the Pulitzer Prize in 2000. Fans who flocked to her stories will be captivated by her best-selling first novel, now in paperback for the first time. The Namesake is a finely wrought, deeply moving family drama that illuminates this acclaimed author's signature themes: the immigrant experience, the clash of cultures, the tangled ties between generations.The Namesake takes the Ganguli family from their tradition-bound life in Calcutta through their fraught transformation into Americans. On the heels of an arranged wedding, Ashoke and Ashima Ganguli settle in Cambridge, Massachusetts, where Ashoke does his best to adapt while his wife pines for home. When their son, Gogol, is born, the task of naming him betrays their hope of respecting old ways in a new world. And we watch as Gogol stumbles along the first-generation path, strewn with conflicting loyalties, comic detours, and wrenching love affairs.With empathy and penetrating insight, Lahiri explores the expectations bestowed on us by our parents and the means by which we come to define who we are.