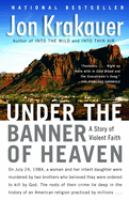 Under the banner of heaven A story of violent faith /-

On July 24, 1984, Dan and Ron Lafferty cut the throats of their brother Allan's wife, Brenda, and baby daughter, Erica, fulfilling part of a revelation Ron received from God. Ron is now on death row. Brother Dan, serving two life sentences for the murders, has never denied killing his sister-in-law and niece but has absolutely no remorse. "I was doing God's will," he says, "which is not a crime." Krakauer, best known for his adventure writing in Outside magazine and his books Into the Wild (1995) and Into Thin Air (1997), has shifted gears to tackle issues of faith in this true-crime/religious expose, which delves deep into the heart of Mormon fundamentalism, where revelations from God are commonplace and polygamy not only still exists but is "a matter of religious duty." Alternating between the bloodier aspects of the origins of the Mormon Church (Joseph Smith Jr.'s lynching in Nauvoo, Illinois, and the Mountain Meadows Massacre in Utah) and some of the more extreme aspects of today's Fundamentalist Latter Day Saints (fraud, incest, and murder), Krakauer's account is gripping yet deeply disturbing. Not only does he interview Dan, an admitted murderer, but also he talks with former child brides and victims of incest. Debbie Palmer, raised to be an obedient wife in FLDS, married at 14 and became a stepmother to 31 kids, including her own stepmother, which made her "a stepmother to her stepmother, and thus a step grandmother to herself." ((Reviewed July 2003)) Copyright 2003 Booklist Reviews

In 1984, Brenda Lafferty and her baby daughter Erica were found murdered in their Utah home, victims of a "removal revelation" that her Mormon brother-in-law had supposedly received from God. Krakauer (Into Thin Air) aims to explain why and how this crime happened by recounting the history of Mormonism from its conception by Joseph Smith in the 19th century and tracing the origins of its extremist sects through to the present day. Using current examples, Krakauer reveals that there are fundamentalist communities throughout North America and that although these sects are not recognized by the accepted Latter-day Saints (LDS) church (mainly because they still practice polygamy), they are able to exist unchecked by both the church and the U.S. government. The author's chronicle of the Mormon religion and its extremist offshoot is tempered by the very real and tangible story of Lafferty and her baby, whose lives were, in effect, taken by a fundamentalist faith. Krakauer, admittedly just trying to get to the heart of religious extremism, remains as impartial as possible toward his elusive and controversial subject, but the result is still unnerving. A thoroughly engrossing and ultimately startling comment on all fundamentalist ideas; for public libraries. [Previewed in Prepub Alert, LJ 5/1/03.]-Rachel Collins "Library Journal" Copyright 2003 Reed Business Information.

Using as a focal point the chilling story of offshoot Mormon fundamentalist brothers Dan and Ron Lafferty, who in 1984 brutally butchered their sister-in-law and 15-month-old niece in the name of a divine revelation, Krakauer explores what he sees as the nature of radical Mormon sects with Svengali-like leaders. Using mostly secondary historical texts and some contemporary primary sources, Krakauer compellingly details the history of the Mormon church from its early 19th-century creation by Joseph Smith (whom Krakauer describes as a convicted con man) to its violent journey from upstate New York to the Midwest and finally Utah, where, after the 1890 renunciation of the church's holy doctrine sanctioning multiple marriages, it transformed itself into one of the world's fastest-growing religions. Through interviews with family members and an unremorseful Dan Lafferty (who is currently serving a life sentence), Krakauer chronologically tracks what led to the double murder, from the brothers' theological misgivings about the Mormon church to starting their own fundamentalist sect that relies on their direct communications with God to guide their actions. According to Dan's chilling step-by-step account, when their new religion led to Ron's divorce and both men's excommunication from the Mormon church, the brothers followed divine revelations and sought to kill, starting with their sister-in-law, those who stood in the way of their new beliefs. Relying on his strong journalistic and storytelling skills, Krakauer peppers the book with an array of disturbing firsthand accounts and news stories (such as the recent kidnapping of Elizabeth Smart) of physical and sexual brutality, which he sees as an outgrowth of some fundamentalists' belief in polygamy and the notion that every male speaks to God and can do God's bidding. While Krakauer demonstrates that most nonfundamentalist Mormons are community oriented, industrious and law-abiding, he poses some striking questions about the closed-minded, closed-door policies of the religion-and many religions in general. (July) Copyright 2003 Reed Business Information.

Traces the events that surrounded the 1984 murder of a woman and her child by fundamentalist Mormons Ron and Dan Lafferty, exploring the belief systems and traditions that mark the faith's most extreme factions.

Traces the events that surrounded the 1984 murder of a woman and her child by fundamentalist Mormons Ron and Dan Lafferty, exploring the belief systems and traditions, including polygamy, that mark the faith's most extreme factions and what their practices reflect about the nature of religion in America. Reader's Guide available. Reprint. 300,000 first printing.

NATIONAL BESTSELLER • From the author of Into the Wild and Into Thin Air, this extraordinary work of investigative journalism takes readers inside America’s isolated Mormon Fundamentalist communities. Now an the acclaimed FX limited series streaming on HULU.“Fantastic.... Right up there with In Cold Blood and The Executioner’s Song.” —San Francisco ChronicleDefying both civil authorities and the Mormon establishment in Salt Lake City, the renegade leaders of these Taliban-like theocracies are zealots who answer only to God; some 40,000 people still practice polygamy in these communities.  At the core of Krakauer’s book are brothers Ron and Dan Lafferty, who insist they received a commandment from God to kill a blameless woman and her baby girl. Beginning with a meticulously researched account of this appalling double murder, Krakauer constructs a multi-layered, bone-chilling narrative of messianic delusion, polygamy, savage violence, and unyielding faith. Along the way he uncovers a shadowy offshoot of America’s fastest growing religion, and raises provocative questions about the nature of religious belief.