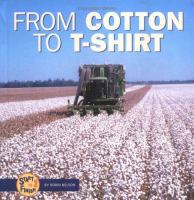 From cotton to t-shirt

Describes how cotton is grown, and how that cotton is processed, spun into thread, woven into cloth, cut and sewn to make a t-shirt.

Reviewed with Robin Nelson's From Kernel to Corn.PreS-Gr. 2. These small, square titles in the Start to Finish series give a basic overview of where familiar products come from, written in language that's suitable for beginning readers. Spreads in both books feature a few sentences in large print on a white page opposite a full-page color photo that shows a stage in production, from planting to seed growth to picking and harvesting. Cotton shows how T-shirts are made and includes several stages in the manufacturing process, such as close-ups of thread making, mechanical weaving, dyeing, and cutting. Corn finishes its journey at a farmer's market, although a commercial grocery store would have been more familiar to most young children. But both titles offer solid introductions that will encourage the youngest readers to consider the history of other familiar items. A glossary rounds out each title. ((Reviewed April 15, 2003)) Copyright 2003 Booklist Reviews

Gr 1-2-Overly simplified information results in texts with little content and misleading ideas. Cotton ignores the plant's growth process and begins with the bolls ready to be picked. Spinning is poorly described in two short sentences. "Thread" is defined as "thin ropes," but the combing of the cotton is not elaborated upon. The three sentences concerning the dye process leave readers to wonder whether wet fabric is loaded directly onto a truck for shipment to a garment factory, and possibly to assume that T-shirts are the only items made of cotton. In Corn, soil preparation is poorly described. The text refers to the plow being used to turn the soil, but the implement shown on the facing page is not a plow. Row planters do not make holes in the field as stated here, and the lone sentence about insect damage is vague. The book's conclusion may lead readers to assume that corn is only for human consumption. Both titles contain average-quality color illustrations.-Eldon Younce, Harper Elementary School, KS Copyright 2003 Reed Business Information.

Describes how cotton is grown, and how that cotton is processed, spun into thread, woven into cloth, cut and sewn to make a t-shirt.