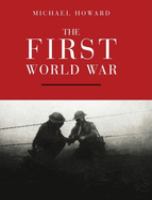 A distinguished British historian presents the central events of World War I for readers who are curious but unknowledgeable about the conflict. It is comparable in style to the author's recent The Invention of Peace (2001). Succinctly expressive, Howard's style concentrates narrative and interpretation within a few sentences, but a deep historical controversy often lurks behind his concision, such as who was responsible for igniting the war. For those readers who are incredulous that a global conflagration could erupt from an assassination, Howard summarizes how the alliance systems came about, the fears of the nations that contracted them, and the special resentments of a German monarch who embodied "archaic militarism, vaulting ambition, and neurotic insecurity." Just as perplexing, perhaps, is the continuance for four years of trench warfare; once again, Howard compactly explains the slight alterations in tactics that generals believed would achieve a breakthrough, but produced instead the bloodbaths that by 1917-18 broke armies and entire regimes. Also touching on the war's course in Italy and Eastern Europe, Howard elegantly applies his erudition and judgment to this concise introduction. ((Reviewed September 15, 2002)) Copyright 2002 Booklist Reviews

An accessible narrative history of the First World War provides readers with a concise introduction to the political motivations, military strategies, major battles, and crushing aftermath of the conflict.

Now more than ever, a clear historical understanding of the conflicts that have engulfed the world is essential. In The First World War, one of the most respected historians of his generation offers a brief but hugely readable narrative account of WWI, its causes and consequences, and the manyhistorical controversies surrounding the origin and conduct of the war. Karl von Clausewitz wrote that war is a trinity composed of the policy of the government, the activities of the military, and the passions of the people. Michael Howard argues that "each of these must be taken into account if we are to understand both why the war happened and why it took thecourse it did." In nine brisk chapters, Howard lays out the historical situation in Europe in 1914, the dispositions of the major belligerents prior to the war, the causes of war, the major campaigns, the entrance of the United States, the crisis, victory, and settlement of the war. Along the way,he offers compelling insights into the political motivations, military actions, and the "passions of the people" that contributed most strongly to the outcome of the war. There is no other short history of WWI on the market today written by a historian of Michael Howard's stature. For anyone wishing to gain a quick but authoritative understanding of one of the most crucial events of the twentieth century, The First World War is the best place to begin.