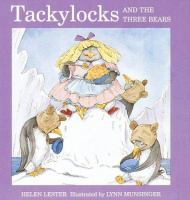 Tackylocks and the three bears

Takcy the penguin and his friends perform a play for the little penguins in Mrs. Beakly's class, but with Tacky in the lead role, things do not go exactly as planned.

K-Gr. 2. In the latest adventure of Tacky the penguin, Tacky earns the lead role in a performance of Goldilocks and the Three Bears. As might be expected, he approaches the play a little bit differently than his companions Goodly, Lovely, Angel, Neatly, and Perfect. While they practice speaking their lines, Tacky practices drawing his. And his slapstick ad-libs during the final performance are much more entertaining to the little penguins in Mrs. Beakly's School than the usual theatrical fare. It is a tough audience, but the wild little penguins are very appreciative: "Best play ever! Hooray for Tackylocks!" they call out at the end. Munsinger's illustrations are not quite as kooky as usual, but they are still lots of fun and suit the amusing text. ((Reviewed October 1, 2002)) Copyright 2002 Booklist Reviews

Tacky steals the show but not in the way he had hoped in Tackylocks and the Three Bears, the fifth title in the Tacky series by Helen Lester, illus. by Lynn Munsinger. This time around he joins up with penguin pals Goodly, Lovely, Angel, Neatly and Perfect to put on a play for Miss Beakly's class. #

PreS-Gr 2-Get ready for a return trip to that "nice icy land." Typically overenthusiastic and clueless, Tacky the penguin draws the lead part in a performance of "Goldilocks and the Three Bears," even though he doesn't quite understand what a "play" is. The big day arrives, and so does the audience, a raucous, ill-behaved bunch of penguin chicks from Mrs. Beakly's School. They pay no attention until Goldilocks appears, or rather "Tackylocks," as they call her. With a huge, blond wig and full costume, Tacky stumbles on stage, knocking over props; eats all of the porridge; and stacks the three chairs one atop the other to search for dessert. The audience cheers with delight when the chairs and Tacky crash to the floor. Worn out by now, he takes all the bedding and sinks into slumber in Baby bear's cozy bed. The other players do their best to carry on, but when they pull and toss the many covers and pillows, Tacky shouts "PILLOW FIGHT!" and the chicks join the players in the melee. Munsinger's watercolor illustrations perfectly capture the hilarity with body postures and facial expressions. Each picture is a story in itself, especially the arrival of the misbehaving audience. This silliness will delight Tacky's loyal fans and win a lot of new devotees, and they'll all be watching eagerly for the next adventure.-Marlene Gawron, Orange County Library, Orlando, FL

Tacky the penguin and his friends perform a play for the little penguins in Mrs. Beakly's class, but with Tacky in the lead role, things do not go exactly as planned.

How do you keep a crowd of energetic young penguins entertained? Put on a play, perhaps? But will they pay attention through an entire performance? If Tacky’s center stage, they might. Even dressed up in his flowing blond wig and little red “skipping shoes,” everyone’s favorite misfit penguin imbues the character of Goldilocks with his own indomitable personality and style. So what if the set is in shambles? This is one performance Mrs. Beakly’s students won’t soon forget.