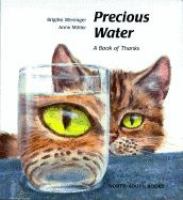 Precious water A book of thanks

A young girl celebrates our most precious natural resource, describes the sources of water and its importance to all living things, and expresses her gratitude for this gift of nature.

Ages 3-6. Reminiscent of Weninger and Moller's Little Apple: A Book of Thanks (2001) in format and tone, this picture book looks at water. In the simple, first-person text, a girl tells her cat where water is found on earth and how necessary it is to living things. She gives water to her plants, puts it in the cat's bowl, and drinks a glass herself. Echoing the ending of the previous book, she says, "I am so thankful for this precious water." Moller has painted, torn, cut, and assembled papers into distinctive collage illustrations. In some double-page spreads, the collage is evident; in others, the elements appear to be paintings. In both, she creates a well-focused illustration, from bleached bones lying in the desert sun to a frog sitting on a lily pad in torrential rain to the quiet scenes of the girl and her cat at home. An effective introduction that complements nonfiction titles on the water cycle. ((Reviewed April 15, 2002)) Copyright 2002 Booklist Reviews

With their straightforward blend of words and images, Weninger and Moller (previously teamed for Little Apple: A Book of Thanks) convey water's life-affirming force for the youngest set. But with little substantive information, the pair just skims the surface in this elemental primer. In the opening spread, Moller shows a young girl holding the glass in front of her. On the left, her cat appears curious. The text ("Look at this glass of water") invites the participation of readers. As the feline peers through ("It is so clear that you can see right through it"), its green eye appears to be enlarged. As Weninger describes life without water, Moller's palette reflects the change. Strips of textured tan, cream and beige paper form a mountainous backdrop of the desert, while an animal's skeletal remains appear in the foreground. When the landscape springs back to life in a stormy flourish, sheets of rain fall on a smiling green frog ("Luckily, we do have water: water that falls from the sky, water in the rivers and lakes and deep beneath the ground"). Later, bits of torn-paper collage appear as pink cactus blossoms, tender green buds and lush leaves as the narrator waters her plants. The artwork whets the appetite. But the lukewarm text likely won't quench youngsters' thirst. Ages 3-7. (Mar.) Copyright 2001 Cahners Business Information.

PreS-Gr 2-Basic facts about the sources of water and its importance to all living things are given in short, simple sentences superimposed on double-page, vivid, realistic paintings. A little girl tells her cat that plants, animals, and human beings would all perish without water. Scenes of dry, brown devastation and skeletal remains are followed by examples of abundant water as a frog sits in a teeming rain; penguins stand in a blue-tinged, icy land; and colorful creatures float in a bubbly, salty sea. At the end, the child waters her potted plants, fills the cat's bowl, and drinks water herself, appreciating its goodness and hoping that we'll always have enough for our needs. Easily understood and imaginatively illustrated, the book is a fine introduction to this natural resource.-Patricia Pearl Dole, formerly at First Presbyterian School, Martinsville, VA Copyright 2002 Cahners Business Information.

A young girl celebrates our most precious natural resource, describes the sources of water and its importance to all living things, and expresses her gratitude for this gift of nature.

In simple words, accompanied by vivid pictures, a young girl celebrates our most precious natural resource-water. She describes the sources of water, its importance to all living things, and expresses her gratitude for this gift from nature. A companion volume to Little Apple.