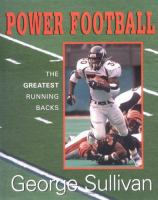 Gr 4 Up-Sullivan's lively writing, the concise three- to four-page biographies, and the excellent color photographs will draw readers to this book. It is great for browsing and for finding quick information and personal tidbits about 18 famous 20th-century running backs. Only two men profiled, Emmitt Smith and Terrell Davis, are currently playing. All but four are already in the Hall of Fame. Arguments can and will be made about who was omitted and why those included deserve to be called "the greatest." The author tried to choose players who attracted football fans and the general public. He doesn't hide O. J. Simpson's trials, or Eric Dickerson being thought of by many fans and teammates as just in the sport for personal glory and money. Each biographical sketch includes interesting personality traits that helped make the player successful. Quotes from fellow players, coaches, and sportswriters add interest to the stories. While it's unfortunate that there is no bibliography or index, the book will circulate for a long time to come.-Michael McCullough, Byron-Bergen Middle School, Bergen, NY Copyright 2001 Cahners Business Information.

Profiles eighteen of the greatest running backs and the skills that set them apart, including Jim Thorpe and Terrell Davis.

No matter what you might think is the most exciting part of the game -- a dramatic catch, a punt returned sixty yards for a touchdown -- most people agree that the power of football is in the play-by-play running game. Agile, quick, but most of all powerful, football running backs have the onerous, and sometimes painful, task of moving the ball forward on the ground -- sometimes only inches, sometimes a few yards, and sometimes, with a little luck, they see daylight and scamper into the end zone. It is a rule of thumb that good teams establish the running game first, before they can begin to be confident that their passing game will succeed. And it is on the running back -- the workhorse of the team -- where that responsibility falls. As he did with quarterbacks in his acclaimed book Quarterbacks, George Sullivan here profiles eighteen of the greatest running backs of all time. From Jim Thorpe to Terrell Davis, each brief profile, accompanied by dramatic full color and black-and-white photographs, brings that star to life and leaves no doubt as to why he was considered great. Whether he had slippery moves that allowed him to avoid tackles or brute force that powered him through the line, the ultimate fact is that he got the job done.