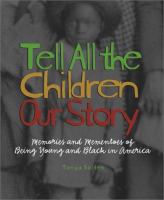 Gr. 4-8. This compilation of the African American experience, from colonial times through the twentieth century, reads and looks like a family scrapbook. Divided into three sections ("Out of Africa," "Longing for the Jubilee," and "Lift Every Voice and Sing"), the chronicle is an introspective celebration of the lifestyles, struggles, triumphs, and aspirations of both recognized and unknown African American children. Readers begin their journey with the first recorded birth of a black child in America and follow along through the plight of the Little Rock Nine to the moving speech given by 14-year-old Ayinde Jean-Baptiste at the 1995 Million Man March in Washington, D.C. Photographs, excerpts from diaries and memoirs, and reproductions of artwork by black artists such as Charles Altson beautifully bring the story of each generation to life. Bolden vibrantly delivers her historical message through a contemporary perspective. ((Reviewed February 15, 2002)) Copyright 2002 Booklist Reviews

In what her preface describes as "this scrapbook, this witness of the black experience in miniature," Bolden (The Book of African-American Women) presents a pastiche of visuals and narratives spotlighting American children of African descent, from colonial times to the present. An abundance of period photographs, paintings, drawings and handsomely set-off extracts from memoirs, letters and journals create the appearance of a scrapbook or album; more importantly, they allow readers to immerse themselves directly in the historical past. An 1861 photograph of children outside an orphanage in New York City, for example, adds immediacy to the accompanying information that the orphanage was looted and set on fire during the Draft Riots of 1863. The first-hand accounts are often heartrending: in an 1868 letter to a Sunday school class in the North, a seven-year-old from Alabama whose mother has died and whose father "went off with the Yankees" writes, "Perhaps I shall get on the cars some time and come to see you. Would you speak to a black boy?" Bolden's overview meanders at times, but it is filled with intriguing, little-known facts, e.g., in March 1955, nine months before Rosa Parks touched off the Montgomery bus boycott by refusing to surrender her bus seat to a white passenger, 15-year-old Claudette Colvin of Birmingham, Ala., was arrested for the same offense. This impressively researched, imaginatively presented history evokes deep appreciation for the struggles, perseverance and triumphs of young black Americans. Ages 9-12. (Feb.) Copyright 2002 Cahners Business Information.

From the first recorded birth of a black child in Jamestown, through the Revolution, the Civil War, Reconstruction, and the fight for civil rights, right on up to the present, the author brings to light how African-American children have worked and played, suffered and rejoiced.

Reveals the history of African American children--from the first recorded birth of a black child in Jamestown, Virginia, to the present day--through historical documents, journal entries, news articles, and interviews.