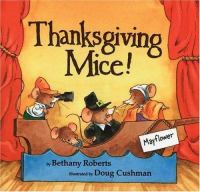 A group of mice have some problems when they put on a play to commemorate the first Thanksgiving, but everything works out all right in the end.

Ages 3-6. From the writer and illustrator of Christmas Mice! (2000), Halloween Mice! (1995), and Valentine Mice! (1998), here's a Thanksgiving picture book for young children. Thanksgiving is the story within a story here, as interpreted by a group of little costumed mice who are putting on a pageant. The rhymed verse sets an upbeat tone for the action. There's plenty of comic byplay in the watercolor illustrations, which show the furry thespians acting out a very simplified story of the Mayflower voyage, the hardships the Pilgrims endured on land, and the triumph represented by Thanksgiving. The happy--though occasionally hapless--members of the little troupe slosh paint on the stage and knock each other over with bits of scenery, as well as acting out the tale with enthusiasm. Preschool and early elementary grade teachers looking for a short, light introduction to the holiday may want to give this colorful picture book a try. ((Reviewed September 1, 2001))Copyright 2001 Booklist Reviews

In another reenactment, Thanksgiving Mice! by Bethany Roberts, illus. by Doug Cushman, rodents are the stars. Simple rhyming text and historical basics come together as the Holiday Mice present a play. (Sept.) Copyright 2001 Cahners Business Information.

PreS-Gr 1-The origins of Thanksgiving are explained by a group of mice as they put on a play for their animal friends. Cushman's cheerful spreads show the little creatures using handmade props and putting their all into this neighborhood production. The characters are charming and the colors are vibrant. Where pictures appear in a smaller frame, objects often extend into the borders for visual appeal. The problem comes with the text. Short rhyming stanzas at first seem to offer a pleasing read-aloud pattern, only to dissolve into an odd scheme, and readers may constantly try to recover a poetic balance that isn't there. Another problem comes with fictionalizing the Pilgrims as mice and keeping true to the Thanksgiving account. These diminutive Pilgrims wear clothes, sail on the Mayflower, suffer a hard winter, and plant corn, but that continuity breaks when "They built new homes in tree trunks-" instead of houses. There is a scarcity of Thanksgiving books for this age group that can adequately explain the historical significance of the holiday in very simple terms. Halloween Mice! (Clarion, 1995) by the same duo hit upon a combination of text and pictures that works very well, but it isn't trying to tie in a historical concept. If you aren't overly concerned with an odd poetic structure or a break in the logic of mice as Pilgrims, then this book should fill a gap in read-aloud Thanksgiving material for the younger set.-Carol Marshall, Bridgeport Public Library, CT Copyright 2001 Cahners Business Information.

A group of theatrical mice have some problems when they put on a play to commemorate the first Thanksgiving, but everything works out alright in the end.

A group of mice have some problems when they put on a play to commemorate the first Thanksgiving, but everything works out all right in the end.

It’s Thanksgiving and four adorable mice are putting on a play for their woodland friends in this delightful read-aloud, the fourth book about the holiday mice. Lively verse introduces beginning readers to basic words and rhyming sounds and tells the story of the very first Thanksgiving, when the Pilgrim mice traveled across the sea and settled in America. The simple story-within-a-story format, accompanied by colorful, action-filled illustrations of mice in costume, also serves as a basic introduction to theater.