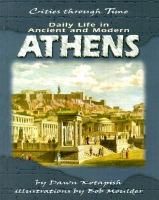 A historical exploration of events and daily life in Athens in both ancient and modern times.

Gr 5-8-Most of this book is devoted to ancient times with sections focusing on various aspects of life, social structure, government, education, the arts, and religion, but the influence of Alexander, Roman rule, Christianity, and Athens under the Ottoman Empire brings readers into the modern period. A useful overview, with colorful illustrations depicting scenes from daily life, and a well-written, lucid text make this a readable and useful source. Unfortunately, some text overlays illustrations, making the print difficult to read. Overall, though, this will be a useful source for reports. R. Conrad Stein's Athens (Children's, 1997) doesn't have as much information or the emphasis on history, but it makes a good complement because of its many photographs and descriptions of landmarks, street scenes, and contemporary Athenians at work and play.-Cynthia M. Sturgis, Ledding Library, Milwaukie, OR Copyright 2001 Cahners Business Information.

A historical exploration of events and daily life in Athens in both ancient and modern times.