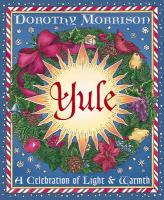 Yule A celebration of light and warmth

Celebrates the history, traditions, and symbols of Yule, offering advice on gifting, feasting, and commemorating the Yuletide season around the world.

There's just something magical about the Yuletide season, no matter where you live or who you are. As bright candlelight mingles with the smells of pine and warm cookies and we perform our yearly rituals of song and family gatherings, the spirit of peace and goodwill seems to reach the heart of even the most cynical Scrooge. In the pages of Yule, Dorothy Morrison presents a wonderful potpourri of holiday lore from around the world and throughout history, along with fun crafts, delicious recipe seven a calendar of celebrations for every day in December. Learn where the traditions of the season originated—for instance, did you know that the ringing of bells was meant to drive away the demons who inhabited the darkest days of the year? That leaving cookies for Santa mirrors the old tradition of leaving a loaf of bread on the table overnight to bring prosperity in the new year? That the Yule log can be traced back to the ancient Greeks? Need a recipe for wassail or plum pudding? Tips for your holiday party? Want to make the season special by making your own decorative crafts and gifts? That's just a sampling of what's inside. Best of all, Yule shows that the spirit of the season is universal and, however we chose to celebrate and worship, we can all join together in the spirit of peace, love, and harmony at this special time of year.