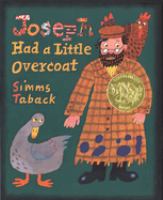 Joseph had a little overcoat

A very old overcoat is recycled numerous times into a variety of garments.

Ages 4^-7. This newly illustrated version of a book Taback first published in 1977 is a true example of accomplished bookmaking--from the typography and the endpapers to the bar code, set in what appears to be a patch of fabric. Taback's mixed-media and collage illustrations are alive with warmth, humor, and humanity. Their colors are festive yet controlled, and they are filled with homey clutter, interesting characters, and a million details to bring children back again and again. The simple text, which was adapted from the Yiddish song "I Had a Little Overcoat," begins as Joseph makes a jacket from his old, worn coat. When the jacket wears out, Joseph makes a vest, and so on, until he has only enough to cover a button. Cut outs emphasize the use and reuse of the material and add to the general sense of fun. When Joseph loses, he writes a story about it all, bringing children to the moral "You can always make something out of nothing." ((Reviewed January 1 & 15, 2000)) Copyright 2000 Booklist Reviews

Pre-Gr 3-A book bursting at the seams with ingenuity and creative spirit. When Joseph's overcoat becomes "old and worn," he snips off the patches and turns it into a jacket. When his jacket is beyond repair, he makes a vest. Joseph recycles his garments until he has nothing left. But by trading in his scissors for a pen and paintbrush he creates a story, showing "you can always make something out of nothing." Clever die-cut holes provide clues as to what Joseph will make next: windowpanes in one scene become a scarf upon turning the page. Striking gouache, watercolor, and collage illustrations are chock-full of witty details-letters to read, proverbs on the walls, even a fiddler on the roof. Taback adapted this tale from a Yiddish folk song and the music and English lyrics are appended. The rhythm and repetition make it a perfect storytime read-aloud.-Linda Ludke, London Public Library, Ontario, Canada Copyright 1999 Cahners Business Information.

An old Eastern European folk song provides the basis for a tale about a peasant who devises clever uses for his worn-out overcoat. By the creator of the Caldecott Honor Book There Was an Old Lady Who Swallowed a Fly. 30,000 first printing.

Joseph had a little overcoat, but it was full of holes—just like this book! When Joseph's coat got too old and shabby, he made it into a jacket. But what did he make it into after that? And after that?As children turn the pages of this book, they can use the die-cut holes to guess what Joseph will be making next from his amazing overcoat, while they laugh at the bold, cheerful artwork and learn that you can always make something, even out of nothing.