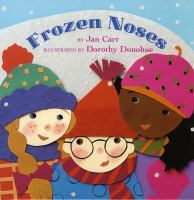 Describes the delights of such winter activities as throwing snowballs, making a snowman, and going ice skating.

Ages 2^-5. The fun and frustration of a winter's day are energetically described in this brightly illustrated picture book: "Frozen noses / Tingly toeses / Sniffle, snuffle / Winter's cold!" Instead of using only standard picture-book words, Carr uses a rather sophisticated vocabulary. Words such as quiver, veer, and collide are folded so effortlessly into the rhyme that it seems a wonder such language isn't used more often in books for the very young. The collage illustrations, which appear to be paper or felt, feature a multiracial trio of friends whose brightly colored clothing contrasts nicely with the gray snow and sky. The book starts with a snowball fight and a sleigh ride and ends, as all winter days should, with a soothing cup of hot cocoa and a nap. ((Reviewed September 15, 1999)) Copyright 2000 Booklist Reviews

PreS Three round-faced, cut-paper kids bedecked in colorful patterned clothing make their way outside for a snow-filled afternoon. Throwing snowballs, building a snowman, sledding, and skating occupy their time until they head back inside for cocoa and "Winter warm." The story is written as a poem with clipped, clumsy phrases in four-line stanzas. The author attempts to spice up the uninspired rhythm with energetic words, but fails: "Slide, collide/Get good at gliding/Hit a skid/Whoops! All a-sprawl!" The collage illustrations also work hard to create a sense of fun, with a sweater-clad dog added for entertainment, but they, too, are oddly deliberate. The kids and even the swirling snow seem stiff and frozen on the page. Ezra Jack Keats's classic The Snowy Day (Viking, 1962) is a better choice for exploring the joys of winter. Martha Topol, Traverse Area District Library, Traverse City, MI Copyright 1999 Cahners Business Information.

Describes the delights of such winter activities as throwing snowballs, making a snowman, and going ice skating

Describes the delights of such winter activities as throwing snowballs, making a snowman, and going ice skating.

The excitement of winter is captured in this charming tale with bold illustrations about a group of children who spend the day making snowmen, sleigh riding, ice-skating, and more.