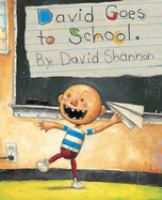 David's activities in school include chewing gum, talking out of turn, and engaging in a food fight, causing his teacher to say over and over, "No, David!"

/*Starred Review*/ Ages 3^-5. We know this kid by now. It wasn't just because of the award-winning No, David! (1998). We know this kid because he is our brother or our cousin or our best friend, or us. Now he has to fit his irrepressible exuberance--and his boyishly disgusting habits--into the classroom, with predictable results. Teacher's brief admonitions appear in careful printing on lined scraps from a school notebook; David is the snaggle-toothed, roundheaded kid. And he can't sit down, or come in from recess on time, or remember to raise his hand. When he chews gum, it's the biggest wad you've ever seen; when he isn't paying attention, it's because the clouds outside the classroom window are resolving themselves into dinosaurs and such. Shannon's picture-book-a-clef, with its acid colors and bold, flat planes, can be laugh-out-loud funny or catch-in-your-throat memorable. The spread in which a distressed David, knees locked together, raises his hand (the teacher's line: "Again?!"), or the penultimate image, where David gets a gold star for cleaning all the desks after school, are as emotionally resonant as can be. And we know David turned out all right, because he's making these books now. ((Reviewed August 1999)) Copyright 2000 Booklist Reviews

K-Gr 3-A pesky though enthusiastic young scholar exasperates his teacher but wins her over with his unexpected charm. Filled with sophisticated stick figures and colorful backdrops, the exuberant paintings depict a boy who's in a class by himself. (Sept.) Copyright 1999 Cahners Business Information.

He's b-a-a-a-c-k! And better than ever. The rascal first unleashed in No, David! returns to wreak havoc in the classroom. Whether he's goofing off at the blackboard ("Sit down, David!"), cutting in line at the cafeteria ("Wait your turn, David!") or drawing on his desktop ("That's it, Mister! You're staying after school!"), David is clearly a handful. But when his teacher gives him a chance to redeem himself by cleaning the desks at the end of the day, he rises to the occasion ("Good job, David!") and receives a gold star. Shannon foreshadows trouble right from the title page: the teacher stands in front of her desk, feet firmly planted, arms crossed and looming so large that her shoulders, neck and head don't make it onto the page. As in the previous book, the adult voice provides the text, but her person is confined to the periphery of the action. David, meanwhile, with his round head, triangle nose and wide grin of pointy teeth, is the pinnacle of boisterous boy-energy. His antics take center stage visually while his teacher's words act as the perfect foil for each spread. After David cuts the cafeteria line, for example, the next illustration shows food splattered all over the walls, floor, David and the boy who was formerly at the front of the line; the two boys point at each other and the text reads, "I don't care who started it." The exaggerated shapes and slightly cartoonish poses of an array of students in all-too-familiar situations will have youngsters crowding together over the book at recess. Ages 3-up. (Sept.) Copyright 1999 Cahners Business Information.

K-Gr 3 David is back! In his very traditional school, he is expected to follow all the rules. He can't run in the halls, cut in line, call out, or swing his paintbrush around. Drawing on his desk is the final straw, and although minor punishments have already been given out, it's time for him to stay after school. In a punishment that fits the misdemeanor, he has to wash the desks. He does a stellar job and is rewarded with his teacher's words of praise. David is a lovable character whose emotions flow across his round face. With a minimum of lines, Shannon shows glee, sorrow, anxiety all of the familiar David emotions and those of the other students as well. On one double-page spread where David is looking out the window and letting his imagination roam, he is told to "PAY ATTENTION!" He is, of course, paying close attention to the clouds. Run out and get several copies of this high-spirited school story. Barbara Scotto, Michael Driscoll School, Brookline, MA Copyright 1999 Cahners Business Information.

K-Gr 3-A pesky though enthusiastic young scholar exasperates his teacher but wins her over with his unexpected charm. Filled with sophisticated stick figures and colorful backdrops, the exuberant paintings depict a boy who's in a class by himself. (Sept.) Copyright 1999 Cahners Business Information.

David finds that school can be great fun after he takes control of his own activities, but the teachers don't think his kind of entertainment is amusing and so try to stay one step ahead of him in order to put a stop to his wild ways. 75,000 first printing.

David's activities in school include chewing gum, talking out of turn, and engaging in a food fight, causing his teacher to say over and over, "No, David!"

A companion to the Caldecott Honor-winning classic No, David!by bestselling picture-book creator David Shannon!David's teacher has her hands full. From running in the halls to chewing gum in class, David's high-energy antics fill each schoolday with trouble -- and are sure to bring a smile to even the best- bahaved reader.