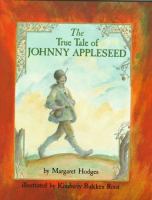 The true tale of Johnny Appleseed

Relates the story of the man who traveled west planting apple seeds to make the country a better place to live.

Ages 5^-8, older for children who can read to themselves. In this picture book, Hodges tells the story of Johnny Appleseed: his Massachusetts childhood, his westward wandering, his devotion to God, his idiosyncratic appearance and habits, his kindness to all, and his planting and care of apple trees. Red apples glow as bright as rubies against the gentler shades of blue, green, and tan that dominate the line-and-watercolor illustrations. In the larger pictures, Root makes effective use of unusual partial borders, which begin as a frame for each full-page painting with a small motif related to the whole, and then gradually become part of the larger composition as the structured border fades away. It's sometimes difficult to tell fact from legend within the story, and the author's note, though helpful in this regard, is concerned with placing Johnny Appleseed in the context of his times rather than providing source notes or verification of details. From a pure storytelling point, however, the text has a fine, seamless quality, and the readers will find it a most appealing choice. ((Reviewed July 1997)) Copyright 2000 Booklist Reviews

Hodges's well-shaped, anecdotal account of the legendary Johnny Chapman presents the familiar eccentric wanderer who wore his stewpot on his head and gave away his clothes. The author credits Chapman with carrying more than apple seeds in trekking back and forth between east and west. "Often, Johnny would take a book apart and leave sections in cabins along his way, picking them up on his next visit." Root sets her jacket view of Chapman against glowing red and green apple tones, and her full-page watercolor scenes are lighthearted in tone and detail. Fragments of gold picture frames appearing sporadically around the paintings are an intriguing device. Artistic elements echoing the story appear in pieces of these frames, which fade away, opening the view suggestively. Both text and illustrations imply that the simple story of the itinerant planter, friend to all and given to religious visions, is grounded in truth yet exceeds literal fact. A bit of tongue-in-cheek and a suggestion of tall tale spark the felicitous blend of biography and folklore, which will be widely used and enjoyed. Dates and places of Chapman's birth and death ground the tale, but Hodges cites no sources; her concluding author's note briefly explains the historical milieu of the westward movement. Copyright 1998 School Library Journal Reviews

The biography of this simple and generous man ranges from his birth in Massachusetts, where he originally grew his orchards, to his journey to the West, where he continued to share the beauty of his trees with others and became known as Johnny Appleseed.