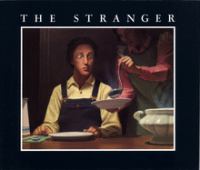 In late summer Farmer Bailey hits a man dressed all in leather with his truck. The man has lost his memory, and his recovery in the farmer's home seems to have something to do with the coming of fall.

Farmer Bailey thinks he's hit a deer while driving his truck, but in the middle of the road lies a man, an enigmatic stranger. He goes home with Farmer Bailey, his memory apparently gone. Weeks pass at the Bailey farm; the stranger seems happy to be around them, and helps with the harvest. Oddly, while trees to the north of the farm turn red and gold with the arrival of fall, Bailey's land seems to be in a state of perpetual summer. One day, the stranger sees geese flying south and knows that he, too, must leave. Not long after that, the leaves at the farm change color and the air turns cool. And every year since, summer lasts a week longer at the Bailey farm than anywhere else. Van Allsburg's story is strangely melancholy, and his straightforward writng is uncannily dry, in contrast to the vivid green and golden landscapes of his paintings. The mood and suspense in this book make it compellinga chance to see the artist take a slight incident and create a truly mysterious event. (All ages Copyright 1986 Cahners Business Information.

Gr 2-4The Stranger is a down-homey modern myth about the phenomenon of Indian Summer, but the opening owes less to the folktale than to The Twilight Zone. Farmer Bailey, rapt on an end-of-summer day in his 1940s pickup, suddenly hits something: the next page shows a young man's body, dramatically foreshortened and stretched out at eye-level in the evening shadows. The terror-stricken victim quickly recovers but has lost both speech and memory. Invited to stay with the farmer, his wife, and little girl, he spends idyllic days with them while autumn's advance is unaccountably delayed. The text scatters clues to the stranger's identity (Jack Frost); but the moment of recognition is cleverly given over to the electrifying illustration alone. Characteristically, the bold simplifications of Van Allsburg's warm pastels look back to American regionalist paintings of the 1930s and '40sespecially to Thomas Hart Benton and Grant Wood. The story is too low-keyed for most children, although several compositions provide suspense with their unorthodox points-of-view, out-of-frame action, and play with effects of light. Here the interweaving of fantasy and reality is more complex than in Van Allsburg's earlier books, and the effects more subtle; but the surface pleasures of color and form are still enticing. Patricia Dooley, formerly at Drexel University, Phila . Copyright 1986 Cahners Business Information.

After Farmer Bailey accidentally hits an oddly-dressed stranger with his truck, the man loses his memory and while he recuperates at the Bailey farmhouse mysteriously unseasonal weather befalls the countryside

The enigmatic origins of the stranger Farmer Bailey hits with his truck and brings home to recuperate seem to have a mysterious relation to the changing season.

The enigmatic origins of the stranger that Farmer Bailey hits with his truck and brings home to recuperate seem to have a mysterious relation to the weather. Could he be Jack Frost?

The enigmatic origins of the stranger that Farmer Bailey hits with his truck and brings home to recuperate seem to have a mysterious relation to the weather. Could he be Jack Frost?