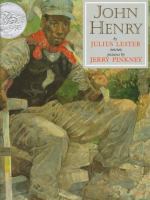 Retells the life of the legendary African American hero who raced against a steam drill to cut through a mountain.

A great American hero comes fully to life in this epic retelling filled with glorious, detailed watercolors. From his momentous birth, when all the animals come to see him and the sun won't go to bed, John Henry works wonders. As a child he helps his father by adding ``a wing onto the house with an indoor swimming pool and one of them jacutzis''-and that's just before lunch. Other episodes trace the growth of his generous spirit. His greatest feat is, of course, in his battle against the steam drill, as he races the machine to cut through ``a mountain as big as hurt feelings.'' He dies (``he had hammered so hard and so fast and so long that his big heart had burst''), but the onlookers understand that ``dying ain't important.... What matters is how well you do your living.'' This carefully crafted updating begs to be read aloud for its rich, rhythmic storytelling flow, and the suitably oversize illustrations amplify the text. As only one example, the animal witnesses of his birth reappear throughout, most notably to watch John Henry's funeral train pass by. This may not supplant more traditional retellings, such as Terry Small's The Legend of John Henry, but it is a triumph of collaboration from the creators of the noted Uncle Remus retellings. All ages. (Oct.) Copyright 1994 Cahners Business Information.

K-Gr 5-Another winning collaboration from the master storyteller and gifted artist of Tales of Uncle Remus (Dial, 1987) fame. Based on several well-known versions of an African American folk ballad, Lester's tale is true to the essence of the steel-driving man; yet, it allows room for touches of whimsy and even includes some contemporary references that tie the hero to our own times. Told with just a trace of dialect, the story moves along briskly toward the climax. Its moral message of the importance of a well-lived life is clearly stated, and the ending is uplifting. Pinkney's marvelous watercolors, abundantly rich in detail, convey both the superior strength and the warm sense of humanity that make John Henry perhaps a more down-to-earth character than some other tall-tale figures. The paintings' muted earth tones add a realistic touch to the text, bringing this John Henry alive. When viewed from a distance, however, figures and details sometimes blend together, making the book better suited to independent reading that group sharing. It will appeal to an older audience than Ezra Jack Keats's John Henry (Knopf, 1987) and is a fine addition to any folklore collection.-Nancy Menaldi-Scanlan, Wheeler School, Providence, RI Copyright 1994 Cahners Business Information.

Nothing can stop John Henry-no boulder, no mountain, and definitely no steam drill.  Newbery Honor winner Julius Lester writes with such power that this African-American folk hero becomes as awesome as a natural phenomenon.  Jerry Pinkney received a Caldecott Honor for his exuberant, glowing watercolor paintings of the hero.  The book, celebrating its tenth year in print, was also a Boston Globe-Horn Book Award winner, a Parents magazine Best Book, and an ALA Notable Book, among other honors.