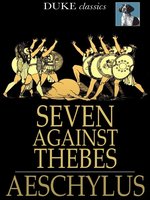 The third and final play in Aeschylus' Oedipodea trilogy, Seven Against Thebes is the only one of the three plays that has survived intact to this day. During the course of the action-packed play, seven would-be usurpers storm the city's gates in a series of brutal attacks. Will the family—still weakened by the curse put on its patriarch, Oedipus—be able to marshal the strength to fight back?