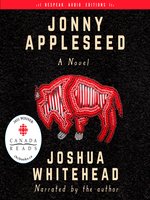 WINNER, Lambda Literary Award; Georges Bugnet Award for FictionFinalist, Governor General's Literary Award for Fiction; Amazon Canada First Novel Award; Indigenous Voices Award; Carol Shields Winnipeg Book Award; Firecracker Award for FictionLonglisted for the Scotiabank Giller PrizeA Globe and Mail Best Book of the YearA tour-de-force debut novel about a Two-Spirit Indigiqueer young man and proud NDN glitter princess who must reckon with his past when he returns home to his reserve. “You...'re gonna need a rock and a whole lotta medicine” is a mantra that Jonny Appleseed, a young Two-Spirit/Indigiqueer, repeats to himself in this vivid and utterly compelling debut novel by poet Joshua Whitehead. Off the reserve and trying to find ways to live and love in the big city, Jonny becomes a cybersex worker who fetishizes himself in order to make a living. Self-ordained as an NDN glitter princess, Jonny...