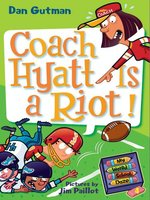 With more than 30 million books sold, the My Weird School series really gets kids reading!In this fourth book in the My Weird School Daze series, the Pee Wee Football season is here! But A.J.'s new coach is crazy. She wants the boys to do push-ups in the mud. She wants them to pick up a car. She even wants to put girls on the team! You'll never believe in a million hundred years what happens in the big game.Perfect for reluctant readers and word lovers alike, Dan Gutman's hugely p...opular My Weird School chapter book series has something for everyone. Don't miss the hilarious adventures of A.J. and the gang!