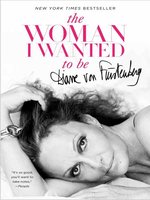 The Woman I Wanted to Be

One of the most influential, admired, and colorful women of our time: fashion designer and philanthropist Diane von Furstenberg tells the most personal stories from her life, about family, love, beauty and business: "It's so good, you'll want to take notes" (People).Diane von Furstenberg started with a suitcase full of jersey dresses and an idea of who she wanted to be—in her words, "the kind of woman who is independent and who doesn't rely on a man to pay her bil...ls." She has since become that woman, establishing herself as a major force in the fashion industry, all the while raising a family, maintaining that "my children are my greatest creation." In The Woman I Wanted to Be, "an intriguing page-turner filled with revelations" (More), von Furstenberg reflects on her extraordinary life—from her childhood in Brussels to her days as a young, jet-set princess, to creating the dress that came to symbolize independence and power for...