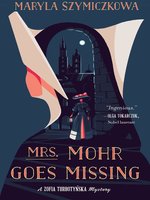 A bored socialite becomes a cunning amateur sleuth in this wildly entertaining, Agatha Christie¬inspired mystery of murder and mayhem set in nineteenth-century Poland¶"An ingenious marriage of comedy and crime."—Olga Tokarczuk, Nobel laureate and author of the Man Booker International Prize winner Flights¶ Cracow, 1893: Zofia Turbotynska—professor's wife, socialite, and bored homemaker—has little more to do than plan a charity auction sponsored by the wealthy residents of... a local nursing home and the nuns who work there. But when one of those residents is found dead, Zofia finds a calling: solving crime. Ridiculed by the police, who have declared the deaths of natural cause, she starts her own murder investigation, unbeknownst to anyone but her loyal cook Franciszka and one reluctant nun. With her husband blissfully unaware of her secret, Zofia remakes herself into one the most surprising, and maybe even effective, detectives combing the city...