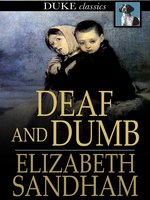 In this gripping account, author Elizabeth Sandham sheds light on the often undesirable circumstances in which disabled children were raised in the early nineteenth century. Those who were lucky enough to be accepted into an asylum received some treatment, but those who remained at home often received minimal care and in some instances were treated poorly and subjected to abuse. This early tale of advocacy serves as powerful testimony in favor of fair treatment for children with special needs.