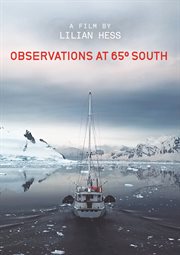 Nine scientists narrate their journey in the most treacherous and southernmost continent on our planet. Antarctica is the driest, coldest, and windiest continent on Earth. Its relentless ice desert extends across 14 million square kilometers, and it can only be accessed via airplane or large icebreakers. This is why the group of nine international scientists kicked up quite a fuss in 2019 when they took off to the Antarctic Peninsula aboard a small sailboat. Through their eyes and cameras, we ob...serve the growing human waste that is constantly arriving to the continent's shores that endangers the lives of those endemic animals that call the icy land their home. Can we save these ecosystems and the environment as a whole? The West Antarctic Peninsula continent is one of the fastest-warming areas on Earth, and yet our knowledge of the flora and fauna that populate this area is incomplete. In following this truly unique scientific mission, Observations At 65º South scratches at the image of what has been considered Earth's last pristine continent, while offering a hopeful outlook upon a group of individuals who are there to make a difference. Join these scientists as they bring the frosty continent to life in a fascinating, cinematic journey.