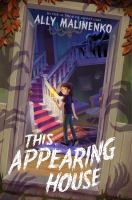 "A strange house appears on Jac's street on the five-year anniversary of her cancer diagnosis, and when she gets trapped inside she will have to confront horrors from her past to find a way out"--Provided by publisher.

When a gabled, turreted house with "a way of watching you" arrives wholly built one October at the end of a suburban New Jersey cul-de-sac, 12-year-old Jacqueline "Jac" Price-Dupree is sure it has appeared out of nowhere. Following "Everything Jac Went Through"—a brain tumor and treatment followed by nearly five years with "No Evidence of Disease"—Jac is tired of her worried librarian mother watching her closely in the new town where they moved for a fresh start. Concerning signs—headaches, hand tremors, and stumbling—suggest a recurrence just as the house suddenly appears, but tension over whether the structure is real dissipates when her friend Hazel and another neighbor also perceive it. Dared by two bullies to enter the house, Jac and Hazel plunge into a nightmarish, moldering web of rooms; soon, Jac is trapped with apparitions and elements that suggest an association between the two. Employing haunted house tropes, Malinenko's (Ghost Girl) ominous telling explores layers of anxiety; if the messaging is occasionally heavy-handed, a strong third-person voice accurately evokes the feeling of long-bubbling uncertainty as well as familial and personal fear amid recovery. Characters cue as white; an author's note concludes. Ages 8–12. Agent: Rena Rossner, Deborah Harris Agency. (Aug.) Copyright 2022 Publishers Weekly.

"A strange house appears on Jac's street on the five-year anniversary of her cancer diagnosis, and when she gets trapped inside she will have to confront horrors from her past to find a way out"--

At the five-year marker of her cancer diagnosis, a house appears at the dead end of Juniper Drive—knowing this is no coincidence, Jac enters this strange place to find out what it wants from her. 40,000 first printing. Simultaneous eBook.

From the author of Ghost Girl comes another standalone spooky middle grade for fans of Nightbooks and Ghost Squad, about a terrifying house and the girl haunted by her experience with cancer, grief, and healing. Are you brave enough to step inside?For as long as anyone could remember there wasn’t a house at the dead end of Juniper Drive . . . until one day there was.When Jac first sees the House, she’s counting down to the five-year anniversary of her cancer diagnosis, when she hopefully will be declared NED, or “no evidence of disease.” But with a house appearing, and her hands shaking, and a fall off her bike, Jac is starting to wonder if these are symptoms—or if something stranger is happening.Two classmates dare Jac and her friend Hazel to enter the House. Walking through the front door is the way in. It’s definitely not the way out. There’s something off about the House; Jac can feel it. The same way she knows it’s no coincidence that the House appeared for her five-year marker. It wants something from her. And she won’t be able to get out until she figures out what.