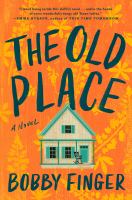 The old place A novel

Long-buried secrets lurk everywhere in Billington, the small Texas town of this debut from journalist and Who? Weekly celebrity podcast cohost Finger. Curmudgeonly protagonist Mary Alice, a widow, lost her only son when he was just 18; both her husband's and her son's deaths occurred under bizarre circumstances. Her best friend, Ellie, lost a son, too, just before Mary Alice's son passed. Finally retired from her position teaching math at the local high school, where she had become an institution, Mary Alice is irked by her replacement, Josie. New York City transplant Josie's urbanity triggers something scornful inside Mary Alice, and this is when things really begin to unravel. The return of Mary Alice's estranged sister Katherine further sends Mary Alice's quaint routine into upheaval. The repercussions of spilled secrets and the appearance of town ghosts could mean the rewriting of history . . . something Mary Alice fears she is not built to survive. Cozy, enthralling, and driven by complex, endearing women, The Old Place explores the mysterious act of realizing the worst in oneself and pushing forward anyway. Copyright 2022 Booklist Reviews.

In Other Birds, next from the New York Times best-selling Allen, Zoey encounters a runaway girl, two grumpy middle-aged sisters, a famed writer, an isolated chef, and three ghosts when she returns to her recently deceased mother's apartment in a horseshoe-shaped house on South Carolina's Mallow Island, where tiny turquoise birds called Dellawisps flit (200,000-copy first printing). In Emmons's Unleashed, deep cracks in Lu and George Barnes's marriage become evident once only daughter Pippa goes to college, even as Pippa struggles to retain her budding sense of independence amid loneliness and the California wine country surrounding them all threatens to burn. Cohost of the popular podcast Who? Weekly, Finger sets his debut, The Old Place, in a small Texas town where a reluctantly retired schoolteacher Mary Alice finds her life—especially her friendship with close neighbor Ellie—suddenly in question when a long-buried secret is revealed. In debuter Huynh's TheFortunes of Jaded Women, three estranged Vietnamese American sisters living in Orange County's Little Saigon must find a way to lift a curse placed on their family long ago never to find love or happiness (100,000-copy first printing). Blockbuster author Sparks again takes readers to Dreamland in a book about pursuing one's desires possibly at the cost of abandoning the past. Copyright 2022 Library Journal.

Finger debuts with an engaging story of a former high school math teacher and the secrets that catch up with her. After 40 years in the Billington, Tex., school district, Mary Alice Roth is forced into retirement. Prickly and adrift, she rekindles a dormant friendship with her neighbor Ellie Hall. Decades earlier, divorcée Ellie moved next door and became fast friends with Mary Alice, by then a widow, as did their same-age sons. Then, after their sons' high school graduation in 2002, a drunk driver killed Ellie's son Kenny. News of the death of Mary Alice's son, Michael, spread through town shortly after, though the cause went "unspoken" by Mary Alice. Now, Mary Alice's estranged sister, Katherine, arrives, bringing news that Michael is in fact alive, and has shown up drunk at her home in Atlanta. The revelation upends Mary Alice's exacting plans for the town's annual picnic. The years of hiding the truth catch up with Mary Alice, as does her husband's covered-up suicide. Though the narrative tends to meander, and some of the twists are telegraphed early, Finger has a firm handle on Billington's complex and stifling social dynamics. Fans of small-town yarns will find much to like. Agent: Kate McKean, Howard Morhaim Literary Agency. (Sept.) Copyright 2022 Publishers Weekly.

Retired teacher Mary Alice Roth, while working her way back to a comfortable friendship with her neighbor, finds the careful shell she’s built around her life threatened by her sister who delivers a staggering piece of news that could send shockwaves through her small Texas town.

A bighearted and moving debut about a wry retired schoolteacher whose decade-old secret threatens to come to light and send shockwaves through her small Texas town.Billington, Texas, is a place where nothing changes. Well, almost nothing. For the first time in nearly four decades, Mary Alice Roth is not getting ready for the first day of school at Billington High. A few months into her retirement—or, district mandated exile as she calls it—Mary Alice does not know how to fill her days. The annual picnic is coming up, but that isn’t nearly enough since the menu never changes and she had the roles mentally assigned weeks ago. At least there’s Ellie, who stops by each morning for coffee and whose reemergence in Mary Alice’s life is the one thing soothing the sting of retirement.  Mary Alice and Ellie were a pair since the day Ellie moved in next door. That they both were single mothers—Mary Alice widowed, Ellie divorced—with sons the same age was a pleasant coincidence, but they were forever linked when they lost the boys, one right after the other. Years later, the two are working their way back to a comfortable friendship. But when Mary Alice’s sister arrives on her doorstep with a staggering piece of news, it jeopardizes the careful shell she’s built around her life. The whole of her friendship with Ellie is put at risk, the fabric of a place as steadfast as Billington is questioned, and the unflappable, knotty fixture that is Mary Alice Roth might have to change after all.