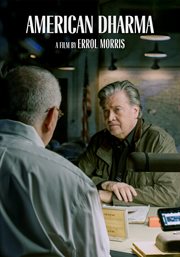 The third installment in Academy Award winning documentary torchbearer Errol Morris's trilogy of documentaries probing polarizing political figures, including Oscar winner, The Fog Of War, and the Emmy-nominated The Unknown Known. In American Dharma, Morris interviews controversial Donald Trump political strategist Steve Bannon to try and make sense of the man and the movement. The film had its world premiere at Venice Film Festival to a standing ovation before having its North American pre...mieres at TIFF and NYFF. The New York Time Critic's Pick had a traditional 90-day theatrical window with support from Alamo Drafthouse, AMC, and Regal locations and a robust P&A spend. The film's subject continues to stay in the news, from his recent indictment for allegations of fraud, to his relentless tour stoking right wing nationalism across the globe.