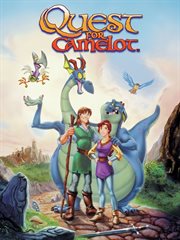 During the times of King Arthur, the story of an adventurous brave girl, named Kayley, whose father, a Knight of the Round Table, is killed by Sir Ruber, a maniacal brute who steals Excalibur and ultimately threatens to seize King Arthur's Camelot. Kayley enlists the blind, reclusive knight-aspirant Garrett and a goofy two headed dragon to brave the Enchanted Forest and retrieve the magic sword. Their adventure is also, of course, fraught with danger.