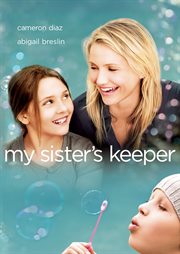 Is it right to do whatever it takes to save a child's life? Cameron Diaz (There's Something About Mary, Shrek films) stars as a mother whose daughter is diagnosed with a fatal form of leukemia. In a desperate bid to save the life of her first daughter (Abigail Breslin--Little Miss Sunshine, No Reservations), she bears another daughter--specially conceived and implanted to be an ideal donor for her older sister. Now, 11 years later, that second child has undergone countless invasive pro...cedures, blood donations, bone marrow donations--and now her sister needs a kidney. Is it right for a mother to ask one daughter to sacrifice so much for another? Should a child be able to decide for herself how much she will sacrifice for her sister?