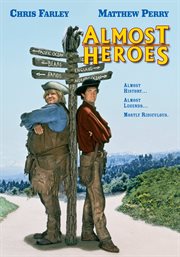 Matthew Perry and Chris Farley star in the true history of the race to express the United States' Manifest Destiny to reach from sea to shining sea, which can finally be told. To the pantheon of American heroes, the two real conquerors of the American frontier can at last be added: Edwards and Hunt. This is their tale of two men who are Almost Heroes. In the late 18th century, veteran tracker and habitual drunkard Bartholomew Hunt (Farley) and foppish blowhard Leslie Edwards (Perry)lead a b...ickering, brawling, bumbling crew of misfits and lowlifes across the unexplored territory from the Mississippi River to the Pacific Ocean. As they trek westward, Edwards and Hunt and company head down roaring rapids and over the Rockies on their way to historical oblivion. From comedian-director Christopher Guest comes a sidesplitting saga of how the West was lost: through the merry misadventures of misguided explorers.