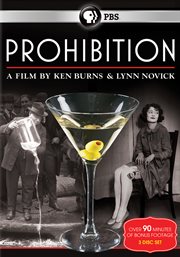 Discover the true story of America's "Great Experiment." Go beyond the oft-told tales of gangsters, rum-runners, flappers and speakeasies to experience the rise, rule and fall of the 18th Amendment to the U.S. Constitution in Ken Burns and Lynn Novick's PROHIBITION. Since the early years of the American Republic, alcohol has been embedded in the fabric of American culture. But by 1830, the average American over 15 years old consumes nearly seven gallons of pure alcohol a year..., three times as much as we drink today. Alcohol abuse wreaks havoc on the lives of many families. As a wave of spiritual fervor for reform sweeps the country, many women and men begin to see alcohol as a scourge. After the Civil War, the country's population swells with immigrants, who bring their drinking customs with them from Ireland, Germany, Italy and other European countries. The temperance campaign ignites, spearheaded by the Woman's Christian Temperance Union. Carrie Nation and her Home Defenders Army bring publicity by attacking Kansas bars with stones and hatchets, and the Anti-Saloon League (ASL) forms to push for an amendment to the Constitution outlawing alcohol nationally. Most politicians dare not defy the ASL, and in 1917 the 18th Amendment sails through both Houses of Congress; it is ratified by the states in just 13 months. When the Amendment is signed into law, Prohibitionists rejoice that America has become officially dry. But Americans are about to discover that making Prohibition the law of the land has been one thing; enforcing it will be another.