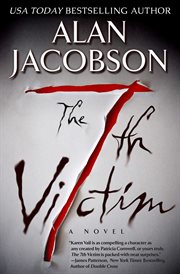 The 7th victim A novel

Karen Vail is no ordinary FBI agent. She's a profiler, brought to life by national bestselling author Alan Jacobson's seven years of unprecedented access to the FBI's vaunted profiling unit. The Karen Vail Series has been raved about by reviewers, readers, law enforcement officers of all stripes, real FBI profilers... even one of the legendary founding fathers of the Behavioral Analysis Unit. And it all started with The 7th Victim. With a dry sense of humor and a closet full of sk...eletons, Karen Vail leads the Dead Eyes Task Force in its search for a serial killer who is not only murdering young women but who has an intimate knowledge of their cases - and their plan for catching him. When the task force is unable to decipher a string of cryptic clues left behind at the crime scenes, Vail leans on a controversial profile she has drawn up - which leads her to believe that the seventh victim holds the key to finding the killer. But there's no way she could be prepared for what she discovers as the story builds to a powerful ending no reader will see coming. Named one of the top five books of the year by Library Journal, The 7th Victim gets the critically acclaimed, bestselling Karen Vail Series off to a groundbreaking start.