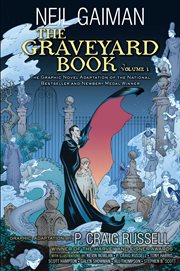 The graveyard book Based on the novel by Neil Gaman. Volume 1. Volume 1.

*Starred Review* Gaiman's frequent collaborator Russell brings his decades of comics know-how to this lovely, lyrical adaptation of the author's well-loved, Newbery Medal–winning book. Not content to rely exclusively on his own distinctive talents, Russell has enlisted some of the industry's greatest contemporary illustrators as contributors, who fill the panels with appropriately gothic tones. In order to give ample room to the novel's twists and turns, the adaptation has been divided into two parts (the second will be released this fall). Running through the first five chapters and interlude of Gaiman's original, this volume weaves the inviting magical story of toddler Nobody Owens, who escapes the brutal murder of his family and is adopted by the supernatural denizens of a graveyard. The well-paced narrative follows Bod as his new graveyard family raises him with care and attentiveness and he begins to explore both the ghostly world he inhabits and the outside world that is his heritage. Each illustrator brings a unique aesthetic, blending together seamlessly to enrich the tale and suggest the subtle shifts of clever Bod's growth and burgeoning sense of adventure. Fans of Gaiman's delightfully macabre sensibilities will be elated. HIGH-DEMAND BACKSTORY: Gaiman's fans are loyal and plentiful. Add a Newbery Medal to the mix and this will be a barn burner. Copyright 2014 Booklist Reviews.

As he did with Coraline, Russell makes the recasting of Gaiman's Newbery-winning novel into graphic form look easy with this vastly entertaining adaptation, first in a two-book set (the second volume is due in late September). Russell conceives the look and layout of the graveyard world inhabited by Bod (short for "Nobody"), the infant who has escaped his family's murderer; six artists, including Kevin Nowlan, Stephen B. Scott, Galen Showman, and Jill Thompson, contribute a chapter apiece. The overall effect is remarkably unified, and the thread of the narrative is always crystal-clear. Bod's devoted adoptive parents, the ghosts Mr. and Mrs. Owens, and the other graveyard inhabitants are dressed in evocative period costumes and drawn in ethereal blue, while Bod's teacher and mentor Silas, about whose status the book was coy, is revealed as a vampire, with a splendid cape and a chiseled jawline. The artwork sets out to entertain rather than to horrify; even the initial murder scene has a certain tranquility. It's a treasure worth having even if the novel is already on the shelf. Ages 8–12. (Aug.) [Page ]. Copyright 2014 PWxyz LLC

Gr 5 Up—The award-winning tale about an orphaned boy raised in a graveyard by ghosts is successfully adapted for the graphic novel format by Russell and his cadre of artists. The arresting opening image of a bloody knife sets the tone for this sometimes gory, but often playful, illustrated version. A toddler's family is murdered by a mysterious stranger, and the denizens of the neighboring cemetery (ie. ghosts, vampires, and even a werewolf-type creature) take on the responsibility of being his caretakers. Renamed Nobody "Bod" Owens, the inquisitive boy grows up among the specters, making friends with a human girl, and escaping from several brushes with death. The panel's dark blues, grays, and purples are punctuated with vibrant greens, yellows, and crimson red. Each chapter is illustrated by an artist or two, who in turn infuse the entry with their own technique, while reflecting the story's original heart and atmosphere. Especially successful is the "The Hounds of God" section, illustrated by Tony Harris and Scott Hampton, which observant readers will note undergoes subtle shifts between the graveyard and the Ghoul kingdom. While some of the original's subtlety is lost, this adaptation still celebrates friendship, loyalty, and family with similar humor and aplomb. The concluding interlude segues eerily into the next volume, for which middle graders will anxiously be waiting.—Shelley Diaz, School Library Journal [Page 96]. (c) Copyright 2014. Library Journals LLC, a wholly owned subsidiary of Media Source, Inc. No redistribution permitted.

A first volume in a two-part graphic novel adaptation of the Newbery Medal-winning tale features sumptuous illustrations by leading genre artists and follows the adventures of Bod, who is being raised by ghosts while avoiding the man who killed his family. 50,000 first printing. Simultaneous eBook.